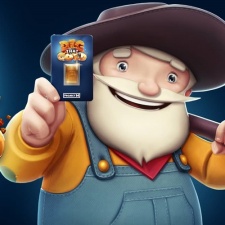 Publisher PlayStack has partnered up with UK start-up Project M to launch a new mobile game called Dig That Gold which offers players real 24k gold bars as a reward for playing.

The adventure puzzle game is set during the California Gold Rush era and has been in early access development for over two years.

Players are tasked with collecting virtual gold and should they collect a large enough amount they’ll be sent real 24k gold bars sent to their home.

The scheme is an interesting way of trying to attract users on a packed mobile store where it can be difficult to achieve scale and retain players without large and consistent user acquisition spend.

Dig That Gold's launch coincides with the 171st anniversary of the California Gold Rush.

“Dig That Gold is everything we look for at PlayStack - it offers something truly unique in an increasingly homogenous market,” said PlayStack CEO Harvey Elliott.

“It also is of course a very rewarding game too - quite literally if you play it enough. But most importantly to us, we spent a great deal of time with Project M to make sure it fulfils PlayStack’s ultimate requirement - that it’s a superbly enjoyable game.”