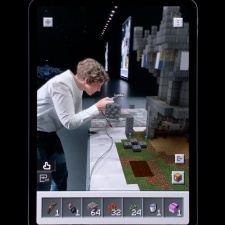 Mojang chief brand office Lydia Winters and creative director Saxs Persson showed off how the game can work in a player’s surroundings.

The Minecraft level was first presented on a table setting, showing how users can wonder and interact with the world through their phones and avatars with others.

The game’s world was then expanded to fit the entire stage, with Winters now standing inside the level itself and interacting with it. Winters and Persson were able to do many of the things you might expect from Minecraft, to build and destroy.

In showing off the interactivity, Persson accidentally harmed an innocent chicken instead of the enemies.

The free-to-play mobile game is set to roll out this summer in a closed beta for both iOS and Android devices.

Those interested in getting their hands on the game can be in a chance of participating by signing up on the website.