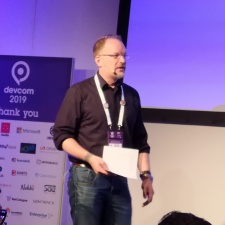 Devcom 2019 has kicked off with another opening statement railing against populism and the far right as event MD Stephan Reichart called on the industry to “use the power of games to make this world a better place”.

Richart recalled his opening words at last year’s event, where he also discussed populism, Donald Trump and Brexit. Themes still at the fore of the global political stage today.

“Over the past year alone so much has happened in this world again,” he said.

Reichart commented on the rise of hatred in society, but remarked how games offer the opportunity to help counter this by telling stories of equality, tolerance and diversity.

“Your games, our games, have the power to make millions upon millions of people think,” he said. “So let’s use this superpower, the power of games, to make this world a better place.”

A number of developers and publishers have received criticism for not tackling political issues in their games, despite in some cases using seemingly politicised settings. However there are some titles that do tackle these issues, while games increasingly star more diverse casts and women in the role of the protagonist.

Week of sessions, networking and showcases

The first keynote for Devcom 2019 is a session from Ubisoft Massive senior producer Cristian Pana entitled ‘Tom Clancy's The Division 2 Production: The Good, The Bad and The Beautiful’.

This kicks off two days of conference sessions at Devcom that includes the likes of Kolibri Games, Improbable, Microsoft, Crytek, Boombit, and Valve, to name a few.

Gamescom will kick off in earnest for B2B attendees on Tuesday, August 20th.

Be sure to also check out our Devcom and Gamescom 2019 party guide if you're looking to make the most of your time in Cologne in the evenings.