TCG off to a great start 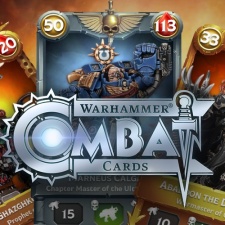 According to the developer, the game has racked up an average of four sessions per day and accumulated 50 minutes of daily playtime per player.

That’s a good foundation for any free-to-play game, but the sharp end of success is turning players in payers.

On that score Warhammer Combat Cards does not disappoint either.

It currently has a payment conversion rate of 15 per cent; much higher than most mobile games achieve.

Indeed, during its first 30 days, 7 per cent of all players had made at least three in-game purchases.

Of course, the next step for Well Played and its owner Phoenix Games is to scale up this audience and see if this early data can be replicated outside the game’s current core fanbase.

“We were always bullish in our conviction that this extremely talented team could thrive and deliver a great title, boosted by the strategic and practical guidance of Phoenix in key areas, but Warhammer Combat Cards’ metrics have surpassed even our internal expectations and blown away those in the industry we’ve shared them with,” commented Phoenix Games’ CEO Klaas Kersting.