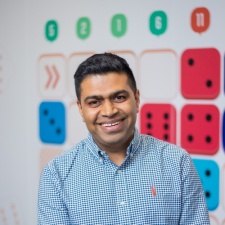 Parmar joins from ad network IQzone, where he held the role of COO of its London office. He previously worked at Talking Tom developer Outfit7 for six years in various roles, and has also worked at companies such as Shazam and Orange.

"This is such an exciting time to be working in the gaming space, and Kwalee is right at the forefront of the hyper-casual genre," said Parmar.

"I feel I can help to cement this position, but also bring Kwalee forward even further, alongside the great minds that are already here. It'll also be great fun to rekindle some past relationships and make many new ones within the studio."

"Dilpesh brings such a breadth of experience in the area of Ad Monetisation, it's brilliant to have him on board," added Kwalee CEO David Darling.

"Hiring the right people is so important to us here at Kwalee, and Dilpesh always stood out as the right person to help take this side of the business further, and continue the growth and success we saw with it in 2019."

Kwalee has made several big hires in 2020, starting with Simon Prytherch as its head of publishing and two new hires in its PR team. The publisher also recently revealed that it has paid out $1.3 million to its staff through its profit share scheme since October 2018.

Kwalee will utilise AdInMo's advertising platform for Off The Rails 3D

Kwalee to use Audiomob's audio ads platform for its titles

What does the future hold for mobile games advertising?