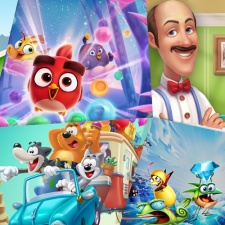 Match-three has been confirmed as the biggest subgenre in the US iOS market, representing 21 per cent of the market's revenue.

That's according to GameRefinery's match-three genre snapshot report, which also stated that 81 per cent of the top-grossing 200 match-three games are more than two years old.

Player motivations for picking up and sticking with match-three titles were found to be thinking and solving, completing milestones, improving skills.

Additionally, consistent live events in-game were found to be imperative for player retention and engagement.

"These mature titles represent a more 'traditional' approach as they focus solely on core gameplay, i.e. crunching candies and tiles. However, the second wave of Match-threes lead by titles like Gardenscapes and Homescapes have brought deeper meta layers to the mix, gaining a significant foothold in the charts."

One title that will be looking to make its mark on the match-three market will be Harry Potter: Puzzles & Spells from Zynga, which recently debuted its first trailer, giving glimpses of iconic locations from the world of magic.