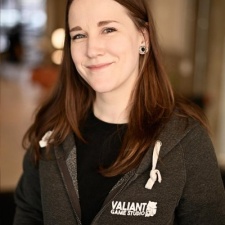 Pocket Gamer Connects Digital has returned once again, set to bring together some of the finest voices in the games industry and beyond.

PGC Digital #4 takes place on November 9th - 13th. To give you a taste of what to expect, we'll regularly be publishing interviews with the speakers at the show.

The conference spans across five days and will feature a broad selection of tracks, talks and speakers, as well as various fringe events and a new and improved meeting system. For more details on PGC Digital and to book a ticket, head to the website.

Today's spotlight is on Anna Jenelius, a Swedish indie developer. Jenelius currently runs Valiant Game Studios, and has previously worked in other industry roles, including QA management at Paradox. She will be bringing her thoughts on narrative in indie titles to PGC Digital #4 as part of the panel 'is narrative just for the indies?'

Anna Jenelius: Valiant Game Studio was founded in 2017. The most notable game is Pendula Swing, which was released in seven installments during 2018 and 2019. In March 2020, the full game, Pendula Swing: The Complete Journey, was released.

I run Valiant Game Studio, meaning I'm currently the only full-time employee. The title currently in the works is developed along with a team of freelancers. I also consult for other game companies, offering my experience within game and narrative design to others.

Like so many others in the industry, I've played games since I was a toddler. However, it wasn't until my mother brought it up after high-school that I realised that game developer is a valid career worthy of pursuing.

If you want to make games, make games. Join game jams, look up tutorials online, get a Unity Free license. If you want to write for games or be an artist, fill your portfolio with work samples and never stop honing your skills.

The amount of women is the industry has increased noticeably, which is great. People are starting to get called out on improper behavior and exploitative work practices. Overall, I think we've matured and started to take important questions more seriously. I also feel like the general public has started to understand more and more what games are, and respect the craft.

Sharing thoughts and ideas with other professionals in the industry

The full conference schedule will be live very soon. Until then, we have a bunch of reasons to come along to PGC Digital #4 right here. You can also check out our other track rundowns and coverage of previous Pocket Gamer Connects conferences ahead of the event itself.

Speaker Spotlight: Tilting Point's André Cohen on IDFA and the evolution of data in games

Speaker Spotlight: IDGA's Renee Gittins' advice on how to break into the games industry