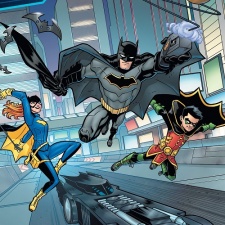 A new Batman game looks to be in development from Warner Bros. for the mobile platform.

As part of the AR missions, players will join the 'Knightwatch' and take part in an original Batman adventure, including encounters with the Joker, Mr. Freeze and the Riddler.

A few examples of the mini-games set to feature were detailed as well, such as an endless driving game where you control the Batmobile and try to avoid obstacles and enemies for as long as possible. Another includes taking down as many targets with a Batarang as you can, while a third involves the grappling hook being used to overcome obstacles and survive in an endless runner-like experience.

The comics will detail how the new 'Knightwatch' program was created and will follow the Dark Knight's adventures throughout the game.

"The perfect Batman mobile experience! Batman is famous for the advanced technologies he uses to protect Gotham City, but he's always been shrouded in mystery ... until now!" reads the app description.

"Thanks to 'DC: Batman Bat-Tech Edition' you will be able to join the Knightwatch and immerse yourself in the universe of Batman, learning how to use his Bat-devices to fight crime and defend Gotham City from the Joker, Mr. Freeze and the Riddler.

"This one of a kind augmented reality app is the perfect Batman themed mobile experience for kids."

DC: Batman Bat-Tech Edition is currently available to download on iOS devices in Italy. No details of a release date or global rollout were noted.

PocketGamer.biz has reached out to Warner Bros. for comment.

The most recent appearance of Batman on mobile came in the form of Telltale's Batman: The Enemy Within back in August 2017.

On the other hand, Warner Bros. has kept busy with several other licenses on the platform. Most recently, it was revealed that Harry Potter: Puzzles & Spells has stormed its way to almost $40 million in revenue.