Player spending consistently on the rise each month since launch 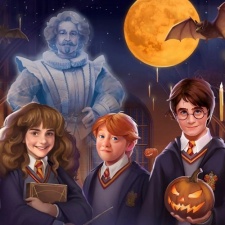 Harry Potter: Puzzles & Spells has stormed its way to $39.7 million in gross revenue, since launching on September 23rd, 2020.

According to data obtained by PG.biz (via Sensor Tower), the match-three game from Zynga has started strongly in its almost four months lifespan. Most notably, Puzzles & Spells has already generated more revenue from player spending than Harry Potter: Wizards Unite, which released from Niantic - best known for Pokémon GO in June 2019.

Puzzles & Spells has also earned 15 million lifetime installs, with the top country for downloads going to the US, followed by players in Russia and Germany. Similarly, the US ranked first for revenue too. These numbers arrive just as the game launches in South Korea.

Wizards Unite's downloads, however, are still slightly higher overall at 19.6 million installs, with 14.8 million of that number originating from the game's first month. Adding in the $12.3 million of revenue that was made during the same duration, it shows a significant drop in player interest.

In comparison, Puzzles & Spells accumulated $6.2 million in revenue and 7.6 million installs in its first month. Sensor Tower noted that downloads peak in November but player spending has been consistently on the rise each month since September 2020.

Jam City's Harry Potter: Hogwarts Mystery continues to be the gold standard for the franchise, accumulating £271.2 million in revenue and 77.8 million downloads to-date. Launched globally in April 2018, the RPG mobile title conjured up $32.6 million and 20.5 million installs in its first 30 days.

Outside of this, the only other mobile-only Harry Potter games were Mastering Magic and Find Scabbers. Both games released before the App Store and Google Play existed and therefore no data was obtainable.

Taking this all into account, it will be interesting to see how well upcoming Warner Bros. and NetEase card RPG Harry Potter: Magic Awakened does with audiences in China once it launches.

PocketGamer.biz reached out to Zynga for comment regarding the figures, however, the firm declined to comment at this time.

A few months after launch, we wrote about why Harry Potter: Wizards Unite was already in sharp decline.

We also spoke to Jam City's Sarah Wolf on transitioning from lawyer to Harry Potter: Hogwarts Mystery game director as part of our Jobs in Games series.