The three development studios are located in Spain, England and Scotland 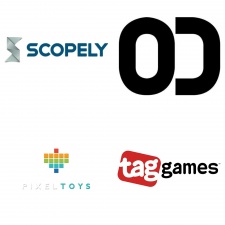 As confirmed by the LA-based company itself, the three studios are Spain-based Omnidrone and UK-based Pixel Toys and Tag Games, in England and Scotland respectively. Each studio is closely working with Scopely, with different genre-spanning games in development.

Scopely has been involved with the development and publishing of Star Trek Fleet Command, Marvel’s Strike Force and Scrabble GO.

Pixel Toys, based in Leamington Spa, is known for the development of Warhammer 40,000: Freeblade, Warhammer Age of Sigmar: Realm War and Gunfinger. The studio is currently working with Scopely on a midcore title that has not yet been revealed.

Tag Games, based in Dundee, has worked on more than 60 titles since its inception in 2006, such as Pocket Mortys, Prison Architect and Angry Birds Action. Currently in development is an MMO strategy game to further expand Scopely’s MMO repertoire.

Omnidrone is a Barcelona-based development team that developed 2016’s MOBA Titan Brawl on Google Play. Omnidrone CEO Gerard Fernandez co-founded Microjocs, one of the earliest companies to develop and distribute mobile titles in Spain. Omnidrone is working on a separate midcore title with Scopely.

Scopely recently invested in blockchain gaming outfit Animoca Brands, along with other VCs such as Coinbase Ventures and Samsung Venture Investment.