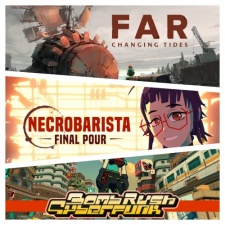 Nintendo has held its latest Indie World Showcase, giving a window into 19 indie games that are set to arrive on Nintendo Switch over the next year or so.

Kicking off the presentation was Bomb Rush Cyberfunk, a "graffiti-skating" experience developed by Team Reptile, due next year. The game showed heavy inspiration from Sega’s Jet Set Radio games, featuring a similar art style and gameplay.

Next up was Toem from Something We Made, a photo-taking adventure with a hand-drawn art style inspired by the Scandinavian countryside, arriving this Autumn.

Okomotive revealed Far: Changing Tides, the next title in the Far universe following Far: Lone Sails. This 3D platformer brings a new character who has set forth on a new adventure in a flooded post-apocalyptic world, available in early 2022.

A game about death and coffee, Necrobarista Final Pour launched on Switch shortly after the showcase. The game is influenced by both film and anime aesthetics and has players diving into Melbourne hipster coffee culture with a hint of necromancy.

At the midway point, the latest entry in the Shovel Knight franchise from Yacht Club Games, Shovel Knight Pocket Dungeon, was given a new trailer. The game will be an action-adventure featuring puzzles and a "dungeon-crawling" twist, expected to be released at the end of the year.

Towards the end of the showcase, several games receiving ports for the Switch were revealed, such as Astroneer, Hundred Days, Slime Rancher, LumbearJack, Curious Expeditions 2 and Gang Beasts.

The show concluded with Eastward, a puzzle-solving RPG from Chucklefish, a dual character adventure with dungeon elements, set to be released on September 16th, 2021.

Anyone that missed the presentation can check it out below in full:

The full list of games shown can be seen below:

Toem (Something We Made)

Meanwhile, in the mobile space, Dr. Mario World has become Nintendo’s worst-performing mobile title and as a result, is due to be shut down in November.

Nintendo indies: Among Us and Spelunky heading to Switch, Super Meat Boy Forever set to launch this month