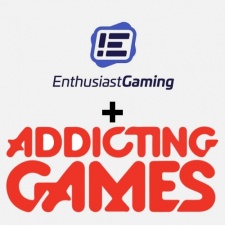 Addicting Games showcases a vast library of over 1,500 genre-spanning casual games with approximately 10 million monthly active users. The site offers in-app purchases and subscriptions on many of its properties.

The acquisition correlates with Enthusiast Gaming’s growth strategy that targets the Gen Z and millennial demographic through casual games.

"Addicting Games integrates with existing advertising and subscription revenue streams and unlocks new streams such as in-game purchases, and other affiliate type deals. At the same time, our media platforms and influencers will expand the reach of Addicting Games’ current titles."

Earlier this year, Enthusiast Gaming revealed a partnership with Coldplay to launch a remix of the band’s then-recent song, 'Higher Power,' that was streamed on Luminosity Gaming's Twitch channel.