Bringing a plethora of remastered classics to Nintendo Switch 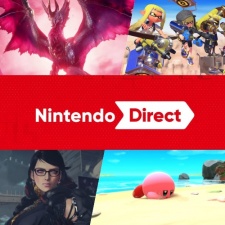 Nintendo has held its final major Nintendo Direct of 2021, featuring a massive showcase of games across a 40-minute presentation.

The stream commenced with the debut of Monster Hunter Rise Sunbreak, the first massive expansion for Capcom’s fantasy JRPG.

The expansion will include new stories, monsters and locations in addition to new gameplay mechanics and will be available in Summer 2022.

Next up, Nintendo provided more details on the upcoming Mario Party Superstars which was revealed in its last direct in June 2021. The game will feature five boards from the original Mario Party from the N64 and will be released on October 29th, 2021.

A new card-based RPG from Nier creator Yoko Taro, Voice of Cards: The Isle Dragon Roars, was premiered and will be landing on Nintendo Switch on October 28th.

Disco Elysium: The Final Cut, will make its way to the Nintendo Switch eShop on October 12th, with a physical edition launching early 2022.

Kirby’s newest adventure will see the pink fluffball able to freely move around 3D areas across abandoned structures from a mysterious past civilisation in Kirby and the Forgotten Land. The game is scheduled for a Spring 2022 release.

The second half of the Hyrule Warriors: Age of Calamity expansion pass will be released on October 29th. New features will include three additional playable characters, including eccentric scientists Purah and Robbie, a new story, additional stages and new actions for existing characters.

Nintendo revealed that the final character to be added to Super Smash Bros Ultimate will be unveiled on October 5th, 3pm BST, by series creator Masahiro Sakurai, who will provide a demonstration of the character’s abilities.

Animal Crossings: New Horizons will receive a free content update this October, including the addition of pigeon barista Brewster and his coffee shop The Roost. More details regarding the update will be revealed in a New Horizons direct sometime in October.

Nintendo showcased additional details for the newest instalment in the Metroid series, Metroid Dread, including Samus’ objective and the biomes on Planet ZDR. The game will release on October 8th, 2021.

Disney Magical World 2: Enhanced Edition, a remaster of the 3DS game featuring all the DLC, will be released in December 2021.

The original Star Wars RPG, Knights of the Old Republic, will arrive on the Switch on November 11th.

Following feedback from a survey, the upcoming HD2D RPG Triangle Strategy has received several changes, including a difficulty option, UI improvements and changeable camera controls. It is scheduled to launch on March 4th, 2022.

Shadowrun Trilogy, a collection of the cyberpunk fantasy RPG series Shadowrun, will be released in 2022.

Castlevania Advance will feature four classic Castlevania games: Circle of the Moon, Harmony of Dissonance, Aria of Sorrow, and Dracula X. The games will feature a rewind function, quick save and button mapping and was made is available now.

The fifth game to be launched on Nintendo Switch via the cloud will be Dying Light 2 Stay Human on February 4th, 2022. A demo for the game will be released on the same day.

Mario creator Shigeru Miyamoto made an appearance to divulge some details regarding the upcoming Mario movie in development by Illumination. Miyamoto revealed that Mario will be voiced by Chris Pratt and Bowser by Jack Black, along with the voices of several other characters, including Luigi, Princess Peach and Toad.

Charles Martinet, who voices Mario in the games, will make several cameo appearances throughout the movie. The untitled Mario movie will be released in North America on December 21st, 2022, with other dates to be announced in the future.

Nintendo gave a glimpse of new elements coming to Splatoon 3, including power-ups and details surrounding the campaign storyline, titled Return of the Mammalians.

The stream ended with a new gameplay trailer for Bayonetta 3 - the first new look at the game since it was first revealed in 2017. The titular witch is seen arriving "unfashionably late" with a new look to battle more demons in the latest entry to the series. Bayonetta 3 is scheduled for release next year, with no official date yet confirmed.

Alongside the overwhelming amount of new games, Nintendo revealed that its online subscription service will receive an additional tier, featuring games from the N64 and Sega Mega Drive. You can read more about the new subscription features here.