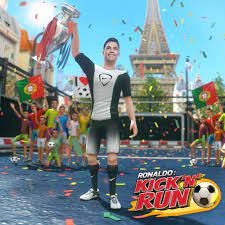 Mobile gaming start-up Multiscription has added two new titles to its Unleashd subscription service. The service is designed to give F2P mobile game publishers a new take on monetisation, without adversely affecting their existing revenue streams.

The new titles, arcade runner 5th Planet’s Ronaldo Kick’n’Run and Northplay’s train puzzler Conduct This!, have each been downloaded millions of times.

Subscribers to the Unleashd service can play the games with benefits and bonuses unique to the service, as well as enjoying the titles, as well as the other twelve available on the service, without disruptive advertising, which is often singled out as the primary means of monetisation for free-to-play games.

Unleashd aims to offer consumers a better deal than multiple paid subscriptions, while publishers on the service get a recurring income from a larger portion of their player base. Publishers such as Beardy Birds, Amuzo, and 1MT Games all have their games on the service, in addition to being available through app stores.

“The great thing about Unleashd is the ability to offer players rewards for their loyalty in a way that isn’t disruptive to the gaming experience - which, with advertising, can be out of our control,” said Northplay founder Michael Flarup. “The ability to give subscribers extra levels and unique trains is a much more direct and fun way to keep players engaged; I’m excited to see what the response from players is.”

“We are looking forward to this new partnership with Multiscription; the idea behind Unleashd is refreshing and it will be good to see how it evolves,” said 5th Planet VP of business development Mogens Agger. “Plus, it was really simple to add our game thanks to the lightweight SDK - which was probably the easiest we’ve ever worked with.”

Unleashd was first announced in 2020. Last year, Multiscription raised $800 thousand for its development.

Can subscriptions give F2P game monetization the shake-up it needs?