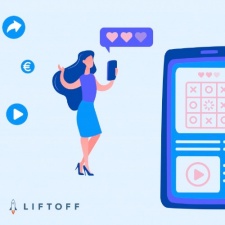 Liftoff, the app monetisation firm, has revealed a new feature to improve in-app advertising (IAA) by using a hybrid optimisation strategy that optimises both in-app purchasing (IAP) and IAA to give better results.

An article by the company goes into details here.

The growth of in-app purchasing is declining, and previously many advertisers relied on it to meet their return on ad spend (ROAS) goals. Given that this is optimised for users who are more likely to make purchases, advertisers can often fail to benefit from a users' maximum revenue potential.

Additionally, per-impression ad revenue data would only be available at the end of the month or sometimes not at all, making it difficult to utilise for optimisation.

Liftoff suggest that its new feature has the solution to this. The firm now has access to impression-level revenue data, which will allow advertisers to maximise ROAS using campaigns that run on an IAP, IAA, or a hybrid monetisation (combined IAP and IAA) optimisation strategy.

How does this work? Liftoff's IAA optimisation aims to drive the highest volume of ad impressions and engaged users to apps. It does this by producing a reliable stream of revenue that augments in-app purchases instead of depending on them.

According to the article, this new approach to ROAS optimisation will target highly engaged users who are most likely to interact with your ads. In return, allowing you to drive the highest ad engagement, increase IAA revenue, and grow in-app purchases while minimising acquisition costs.

Furthermore, the article added that Liftoff advertisers who started using IAA optimisation in their ROAS strategy had significant performance gains.

However, this isn't without its limitations. Users are limited to the number of ads they can view, which may have an effect on the value of each impression. Advertisers are also required to set up an ad revenue postback through their MMP and mediation partners to make use of the IAA optimisation feature.

Advertisers will have to decide for themselves if they want to make the change from the traditional IAP-only strategy to Liftoff's IAA optimisation.

Liftoff is not the only company in the mobile industry trying to support women. Riot Games recently released its diversity and inclusive report, revealing that 30.4 per cent of its new hires in 2021 were women.