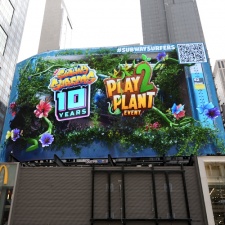 SYBO, the mobile game developer behind Subway Surfers, is advancing its commitment to sustainability by rallying its more than 150 million active players per month to help plant over half a million trees and heighten awareness to combat the global climate crisis with activations both in-game, with a giant digital Billboard in Times Square and by planting a forest of trees with Ecologi.

The Play2Plant takeover begins later this month through a series of smart social media content, in-game engagement, and a first-time rotating spot on NYC's Times Square beast billboard nudging players to help save the planet as they play Subway Surfers. Simultaneously, forest growth will take over SYBO's social channels, and the Ecologi Subway Forest will illustrate in real-time the type of tree species planted, its age, where and by whom.

Players for the planet

"The dire impact of global warming deeply affects everyone, including our Subway Surfers gaming community and we are committed to using our platform to help," said CEO Mathias Gredal Nørvig, SYBO Chief Executive Officer. "Through Play2Plant, we are giving our players an opportunity to help our planet, move towards a more sustainable ecosystem and bring much-needed attention to those who may not be as aware of the crisis."

Since the Play2Plant inaugural initiative last year, SYBO and its partner Ecologi have planted 400,000 trees around the globe. A global social enterprise dedicated to positive climate solutions, Ecologi can responsibly plant millions of trees a month through partners like SYBO and others.

A recent study by the Yale Program on Climate Change Communication and Unity, the world’s leading platform for creating and operating interactive experiences, revealed that 73% of video gamers think global warming is happening, 56% of those understand it is human-caused and 63% feel a personal sense of responsibility to help reduce the impact of global warming. “We must use our resources to deliver the message that climate change is real, it is happening and everyone can do something,” Nørvig added.

“Whether you plant a tree, change consumption habits or more; start discussing with family and friends, the time is now.” Beginning September 19 through October 7, players can join the Play2Plant event in Subway Surfers World Tour featuring New York City. They will be asked to share user-generated content from the game on Tik Tok using the custom sound created by SYBO, encouraging others to do the same.

Along with inclusivity, diversity and kindness, sustainability is among SYBO's core values. In 2019, SYBO took the Play for the Planet pledge and committed to using its platforms to inform, nudge and take meaningful action in the fight against climate change. SYBO offsets its CO2, runs its offices on solar power, has an organic canteen and has historically invested in several impact investments as well as making substantial charitable donations.