“Today, due to the fierce competition between publishers, indie game developers have more and more options to publish their game and more importantly, make hypercasual their business model.” 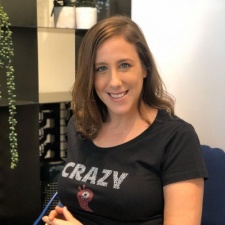 Moria Goldstein leads the entire hypercasual publishing pipeline of CrazyLabs. Before that she was the Head of Production at Gravity, a leading animation and production studio. Goldstein joined CrazyLabs back in 2014, well before hypercasual was a genre of it’s own. When the genre became more and more prominent, Goldstein and her team took on the company’s publishing business in order to help indie developers and game studios get into hypercasual and create top-chart mobile games.

Goldstein joins us for Pocket Gamer Connects Helsinki Digital 2020 where she will provide her guide on how you can turn your casual production team into a hypercasual commando unit.

Before the event takes place next month, we caught up with Goldstein to see what’s changed in the games industry since she joined, and what trends she expects to see over the next 12 months in the industry.

PocketGamer.biz: Tell us a bit about CrazyLabs

Moria Goldstein: CrazyLabs is a top ten free casual and hypercasual mobile games developer and publisher, with over 3 billion downloads. Founded in Israel ten years ago, today CrazyLabs has offices in China, Macedonia, Bulgaria, Germany and Ukraine and have recently launched two gaming hubs, one in India and the second in Israel.

As head of publishing, I am in charge of the strategy and the business development aspect of publishing in CrazyLabs. My goal is to create the best possible business propositions and training programs for indie developers, so that my team of rockstar publishing managers can find new game development talents and create a high-level pipeline of hypercasual hit games like our recent hits: Tie Dye, ASMR Slicing, Soap Cutting & AMAZE!.

I joined the business six years ago, but was working on animated projects long before that, as the head of production in one of Israel's leading production and animation houses. I’ve always had a passion for the business, a keen interest in what makes people play or watch one thing but skip another, and with mobile games, defying gravity is even more challenging and satisfying. For me, the main attraction is working in a creative environment, and I thrive on the combination between creativity and business development.

Social distancing affects everyone, and with mobile gaming people can spend time together while they are apart

Find out if you have an audience for your idea - in hypercasual you can find out whether your idea has an audience early on. It can save you time, money, and heartache. For example, social media channels are a virtual thermometer: a great way to find out what themes for games can make it next, how big of a trend it is, and whether this has mass appeal and can become even more fun if gamified.

Also, give it a try! So many casual studios think that hypercasual is not for them, and they miss out on an amazing opportunity to perfect their skills and create another revenue source for their studio, in a fraction of the time it takes them to create an average casual hit game.

I think it has become extremely competitive with every month that passes - but that just pushed all publishers to be better and release better games. We ourselves felt it with the number one releases we had in the past 12 months. The art is more refined, the metagame is better developed and the entire game experience is heavily influenced by our constant desire to become the player’s favorite pastime.

Today, due to the fierce competition between publishers, indie game developers have more and more options to publish their game and more importantly, make hypercasual their business model

I feel that social gaming is about to take another step into the ring. Social distancing affects everyone, and with mobile gaming people can spend time together while they are apart. Additionally, spending time in quarantine pushed the entire DIY industry, and I believe we’ll keep on seeing this sub-genre emerging in more and more game themes, since it’s fun, it’s familiar, and a mobile game lets you have fun without the mess.

Sometimes it seems like a different world (with big publishers dominating the charts and hypercasual games spreading like wildfire), but on the other hand, top ten publishers support many indie game developers and studios like never before, and help them reach their maximum potential. I also feel that hypercasual now has sub-genres of its own, best example being ASMR games that help players unwind, feel relaxed and accomplished. Another thing that changed is that in the past, publishers were quite picky, and not many developers got their day in the sun. Today, due to the fierce competition between publishers, indie game developers have more and more options to publish their game and more importantly, make hypercasual their business model.

With the success of Pocket Gamer Connects Digital #1 & #2, my team and I are very excited to meet new developers and introduce CrazyLabs to studios looking to get into hypercasual.