How to win at Hearthstone without handing over stacks of cash 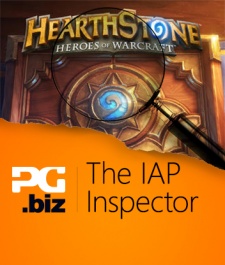 Each installment, we'll be looking at the incentives or pressure applied to make in-app purchases, their perceived value, the expansion offered by the IAPs and the overall value of the experience.

This week, we take a look at Blizzard's free-to-play card battler Hearthstone: Heroes of Warcraft.

From the outset, it's abundantly clear that Hearthstone is a big budget project.

A far cry from the typical, muted, and low-strategy mobile F2P card battler, Hearthstone wears its Blizzard heritage proudly on its sleeve and is closer in feel, execution, and player-targeting to Magic: The Gathering than it is to Rage of Bahamut.

Hearthstone gives players the option to unlock and choose between nine different decks, each corresponding to a job - and famous hero - from the lore of Warcraft.

The decks are tailored to different playstyles, but each employs a similar assortment of minion, spell, and weapon cards. This leads to a unified feel in mechanics despite the tremendous amount of customisation possible in a deck.

Hearthstone challenges veteran players thanks to its emphasis on skill over disposable income.

Matches are played either against AI opponents (Practice) or real-time against other players in either casual or ranked matches. For the truly ambitious, there's an Arena mode that pits "drafted" (or constructed) decks of random heroes and select cards against opponents who drew from the same pool of potentials.

In PvP matches, Hearthstone does a fair job of matching players based on their rank - so there's a lot of potential game here to play with for free - especially since play in Hearthstone is refreshingly ungated by energy bars, stamina, or similar mechanics.

There's only one currency in Hearthstone, Gold, and there are two uses for it: buying packs of cards and buying entrance into the Arena.

Each pack contains 5 "Expert" Cards, with at least one guaranteed to be Rare or better (Epic, Legendary).

Gold and cards are earned abundantly in-game, and for my test run I focused on buying packs rather than making Arena runs.

As such, I unlocked 10 packs worth of cards for free - netting 40 cards just for sinking a few hours into Hearthstone.

The games I played to earn these cards were enjoyable, but time consuming - so impatient players might decide to spend $10 or $20 on Hearthstone to quickly fill out their decks.

The Arena, however, provides its own draw toward IAPs as one can only gain access to it after unlocking all decks (a relatively trivial task) and it has the potential to pay out big time.

A player can buy entrance to the Arena for either $1.99 or 150 Gold - roughly a day-and-a-half's worth of accumulated currency - and each Arena run rewards players with the minimum of one pack of cards and some Gold.

So even if a player loses three matches straight, they'll still (roughly) get their money’s worth given the cost of packs.

Hearthstone knows its audience well, and it's targeting core to mid-core CCG players.

As such, Blizzard put a good amount of value in each IAP, and players are guaranteed to walk away with at least two rare cards for the smallest in-app purchase.

If these high-value cards aren’t usable in a player's preferred decks, they can always refine them down in the Crafting system and use the Arcane Dust generated to create new cards.

Unlike many other card battlers on mobile, Hearthstone puts an honest focus on skill over improving a card's strength - so there’s no leveling system in place for cards.

Epic and Legendary cards do tip the balance somewhat and can easily give players an advantage early on (or in much later deck builds), but they're scarce enough that it would be difficult - or incredibly expensive - for a player to buy enough packs to effectively load their deck with them.

Arena tickets have less of a fixed value, since the card selection is random and they require an expenditure of time for the three- to twelve-match runs.

Well-heeled CCG veterans with time to spend will almost certainly get more from spending $1.99 on an Arena run than they would on a $2.99 purchase of 10 cards, but newer players might find the random play or time commitment daunting.

Everything about Hearthstone is tailored toward luring players in and making them want to love the game.

The graphics and audio are absolutely top-notch, and each match ends with the requisite celebration screen which never fails to trigger a rush of dopamine in the 'ol gray matter.

But unlike many other mobile CCGs that overuse the positive emotions engendered by a victory screen, wins in Hearthstone actually feel rewarding since they require a good amount of strategy and luck to achieve.

Moving past that, each card features great - if cartoony - artwork and individual audio reactions for its summoning, attack / usage, and - when applicable - demise. This interactive and richly detailed game world makes it easy to stay engaged while waiting for an opponent to make a move.

As for the experience of the matches themselves, they feel gratifying and challenging in equal measure.

I honestly derived more enjoyment from a close loss against a clever player than I did from delivering crushing defeats to inexperienced opponents - and more importantly, I never felt like I lost because someone threw money at their deck.

The value of what players receive from Hearthstone for free is, simply put, excellent.

With ungated play available from the very beginning, it’s easily possible for a player to sink hours into Hearthstone without spending a cent on it. What’s more, they'll unlock a fair amount of cards and can customise their preferred decks extensively as they play.

In my anecdotal IAP experience, I bought four packs of cards (for a total of $6.20) and received five Rares, one Epic, and 14 Commons - of which two were duplicates of cards I had already unlocked.

While only three of these cards made their way into my regular decks, the rest were used to craft desired cards - and so the money invested felt well spent.

It's possible that a player might feel frustrated if their purchased packs offered nothing good or viable for their builds, but this is a risk that's existed in the genre since the days when Magic: the Gathering first appeared in comic book shops back in the 1990s - and it's something the targeted audience for Hearthstone is probably willing to forgive.

Hearthstone is an exceptional crossover CCG that offers simplified, streamlined gameplay - but still manages to deliver a deeper, and more rewarding, experience than most free-to-play card battlers available on the App Store.

Its bright graphics and ranked gameplay make it accessible for newcomers to the genre, but it'll still challenge veteran players thanks to its emphasis on skill over disposable income.

While card packs and Gold can easily be earned in-game, it's likely that many who fall under Hearthstone's spell will have an easy time justifying a weekly purchase of $1.99 or $2.99 - which is well in-line with one what one would expect from physical CCGs.

Yet those who decide to freeload exclusively will receive their own reward as they grind for Gold, since they'll become intimately familiar with winning strategies - regardless of whether they're on the happy end of them or not.