Almost 17% of mobile users own both

June 12th, 2012 - 12:33pm
By Keith Andrew
Smartphone owners are increasingly looking to expand the experience by picking up a tablet, with ownership among smartphone consumers  soaring during the last 12 months.

That's according to a new report by comScore, which states 16.5 percent of mobile consumers own both a smartphone and a tablet.

Boil that figure down to smartphone users only, and comScore claims one in four also own a tablet. 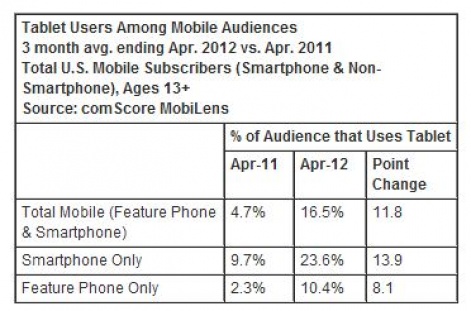 "Tablets are one of the most rapidly adopted consumer technologies in history and are poised to fundamentally disrupt the way people engage with the digital world both on-the-go and perhaps most notably, in the home," said SVP of mobile Mark Donovan.

"It's not surprising to see that once consumers get their hands on their first tablet, they are using them for any number of media habits including TV viewing."

Overall, comScore claims tablet adoption has "exploded" since the launch of the iPad, with Apple having sold 67 million devices since launch as of April.