Nerfing rogues and gaming grans: The making of Hearthstone 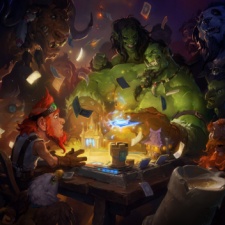 For a game that's been under development for the better part of half a decade, Blizzard did an admirable job of keeping a tight lid on its free-to-play CCG Hearthstone.

Announced last spring at PAX East, it was clear from the outset that Hearthstone wasn't going to be a typical free-to-play card battler along the lines of Rage of Bahamut.

"We were not really thinking in those terms when we started working on the game," Blizzard's Eric Dodds begins. "We were really focused on making a cool collectable card game (CCG) that could appeal to lots of people."

And now, after its tablet debut, it's something of an understatement to say that Hearthstone has appealed to lots of people.

After rocketing to the #1 top-grossing spot for iPad in China and Korea, Hearthstone’s done the business globally - and it even help offset sagging quarterly profits for Blizzard.

But the road to this early success wasn't an easy one, and Blizzard faced a difficult task in bringing both Hearthstone and its multiplayer client Battle.net to the iPad.

Luckily for fans, the nimble team at Blizzard was able to pull it off. But just how nimble was that team?

"It depends on how you view the development of the game, as that took place across two very different stages," Dodds states.

"Our early stage of development started around five years ago, where we had just a few people kicking around design and art ideas about what the game might be. We were doing lots of paper prototyping and flash prototyping, but we were not sure exactly what we were making.

"It wasn't until two or so years ago that we had a full development team in place and started working on the game as you know it today. It was at that point that we staffed up to the team of 15 people that we shipped the game with."

Despite the changes in staff size, the team at Blizzard designed Hearthstone as a free-to-play game from the earliest stages of its development - so players around the world could try their hand at it.

Our core tenet is that collectible card games are awesome, and we want to get people who had never played CCGs before playing them.

"Our core tenet is that collectible card games are awesome, and we want to get people who had never played CCGs before playing them. Making the game free-to-play got rid of the biggest obstacle that might keep players from trying out the game, so that is the direction we went."

Another driving force behind Hearthstone's development was a set of immutable traits that helped ensure it stayed true to its vision.

"We [had] a set of what we call 'Stakes in the Ground' which helped drive our decisions when building the game,” he offers.

"These Stakes are things like 'Immediate fun for the first time player' and 'Provide depth for the hardcore player and show the new player that there is additional depth'. Even now during development we look back to our Stakes to make sure we are still on the right path."

Lost in the shuffle

But that's not to say that Hearthstone didn't change as its development moved along.

"We removed or changed lots of cards, but I can't think of any that I actually wanted to keep in the game," Dodds says of the various chops made to Hearthstone's colourful cast of cards.

"We used to have cards that had the keyword 'Critical Strike', and those cards had a 25 percent chance to do double damage, but it felt too random.”

And randomness wasn’t the only reason for edits made to the cards. The player experience and was another considerations.

“We used to have another ability that gave Minions a bonus attack on their owner’s turn, but it was confusing to see the Minions attack changing every turn, so I was glad we removed that as well.”

Balancing, too, was another reason for many changes to Hearthstone.

"The original Rogue Hero ability used to give you a 1/2 weapon, and if you already had a weapon equipped it gave your current weapon +1 Attack permanently," Dodds begins.

"We had problems with Rogues just hanging back and building their weapon into something huge, so we adjusted the ability to give the weapon +1 Attack until the end of a player's turn. Even that ended up being very strong, so we changed it to what it is today with the Rogue getting a 1/2 dagger."

From the outside, making a game playable on PC, Mac, and iPad seems easy - but the reality for Blizzard was quite different thanks to the idea of true cross-platform play.

Making this a reality was something Dodds described as "a significant undertaking", and one that required, "several engineers from the Battle.net team embed with the development team in order to focus exclusively on bringing over the authentication flow and social features like the friends list."

But this wasn't just for the sake of making Hearthstone feel at home on the iPad. It was also because "getting cross-platform play between PC/Mac and tablets required us to bring Battle.net to a whole new platform," Dodds noted.

"On the PC we have the Battle.net app that handles things like storing your login credentials, letting you know if there are any important server updates to communicate, and choosing which language you want for Hearthstone," Dodds pointed out.

"Since there is currently not a Battle.net app for iOS, we had to find ways to integrate that same information and those same settings into the iPad UI without adding too much clutter."

While this created a headache on the backend, it was necessary to ensure the iPad version would live up to Blizzard's expectations.

"Our goal was really the same as the PC version of the game, which was to make a fun game that anyone could enjoy, including people who don’t normally play collectible card games," Dodds notes.

"Both versions let you play the same card collection against the same player pool, and the UI is very similar on both platforms, so a player coming to the iPad from the PC should instantly know how to play."

But there is one big difference between the iPad and PC version, something Dodds calls the "physicality" of the tablet game.

“On the iPad you get the tactile experience of touching the cards and dragging them around the gameboard,” he began, before quickly adding that “Opening card packs is also pretty cool.”

As is the ability to play wherever you'd like.

"The other advantage to playing on the iPad is that you can play it pretty much anywhere. I often play it while watching TV or while sitting in bed and I love the ability to play the game wherever it is that I'm hanging out in the house."

This portability also planted the seeds for social meet-ups where Hearthstone players could compete against each other in person - events known as Fireside Gatherings.

But these weren't something Dodds and his team thought about early on in Hearthstone's inception.

"The idea for Fireside Gatherings came later in development, and it sprang out of the idea that you could play the game most anywhere on an iPad. We really like the idea of the game being a social experience," says Dodds.

"Normally something like this would require that people drag their computers to the location, but with a tablet, it's really easy to take your device with you and play with other people."

While Hearthstone is clearly meant to appeal to long-time fans of the franchise, it was also designed with an eye towards new players as well.

"From the very beginning, Hearthstone was designed to be fun for everyone," Dodds explains before catching himself.

"Now 'everyone' is perhaps a large audience, so we really aimed for people who like strategy - not just people who had played CCGs before - but perhaps people who have considered playing them in the past and have been turned off for various reasons.

"We examined all the reasons why a player might not be interested in CCGs, such as them being too complex, or multiplayer being too scary, or not having a compelling visual style, and vowed to improve Hearthstone in all those areas," he concluded.

Hitting all the right notes

A final piece in Hearthstone's puzzle was its audio.

With some 13 composers lending their talents to the various games in the nearly 20-year history of Warcraft, there was no shortage of possible talent. But in a meeting with Russell Brower - the senior director for audio and sound - the team decided to go in a slightly different direction.

"We knew we wanted [Hearthstone] to be a bit different from Warcraft music while also having a friendly and inviting vibe to it, rather than the big epic sound that comes with music in Warcraft," Dodds clarifies.

"So, we invited a few musical composers to try their hand at what this new take on Warcraft might sound like. Peter really knocked it out of the park! We thought we knew what we were looking for and Peter came along and hit the sound perfectly."

With excellent sound joining Hearthstone's sumptuous visuals and refined gameplay, it's no surprise that the game's managed to appeal to the audience it has. What is surprising, however, is the age range of Hearthstone players.

Still collecting Gold: Hearthstone at three shows no signs of slowing down