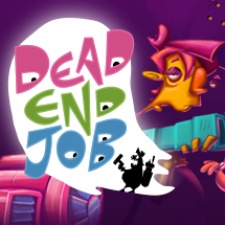 The last 12 months have been one heck of a ride for our regular Big Indie Pitch competition.

We’ve seen some incredible games and given the judges some very tough decisions to make. In fact, the most recent winner at Pocket Gamer Connects Helsinki 2018 was only crowned after one of the most intense and divided judging sessions we've ever seen.

One stop on the Big Indie Pitch's global tour was a place a little closer to home, as we headed to Dundee in Scotland to host a very special Big Indie Pitch at Abertay University.

This pitch was incredibly diverse and unique, as we saw a range of both fledgeling and fully-fleshed out pitches from some of the most interesting upcoming minds within the games industry.

Described by the developer as Ghostbusters meets The Binding of Isaac with a bit of Ren & Stimpy, Dead End Job takes retro twin-stick shooting action and presents it like a cartoon straight outta the 90s.

You control Hector Plasm, an expert in paranormal pest control, as he patrols town rescuing citizens and sucking up ghosts in his trusty vacuum. You’ll have to watch out though, as Hector has a ghost or two from his past that aren’t quite finished with him yet.

Dead End Job impressed the judges and was a worthy winner. You can find out more about developer Ant Workshop in our interview with the lead developer from February.

However, Dead End Job wasn't the only game that drew the judges' praise. You can read about all the games which entered in Dundee on our sister site PocketGamer.co.uk. Who knows? One of the top three there could be taking away a prize at The Big Indie Awards 2018, in association with G-STAR, this November.

The Big Indie Awards 2018 is once again brought to you by the Steel Media team (the firm behind Pocket Gamer, PG.Biz, PG Connects, the Global Connects Parties and of course the Big Indie Pitch itself) but it wouldn’t be possible without the support and love of the lovely folks at G-STAR.

Launched in 2005, G-STAR is the annual South Korean computer and video game trade show. It’s a one-stop, accessible gateway to the Asian market and it sees the biggest players in publishing, development and investment gather every year to do business and set the industry trends. G-STAR is open to both trade visitors and consumers, and it takes place on November 15th to 18th at BEXCO, Busan. In 2018 a focus for G-STAR will be the international scene so national pavilion participants will be strongly welcomed. As well as booths from representatives around the globe, 2018’s G-STAR will be heavily promoting the indie game scene. That’s where you come in. For more information about the conference, visit the official site.