We speak to Ant Workshop, who won the Big Indie Pitch at Abertay University in Dundee 2017 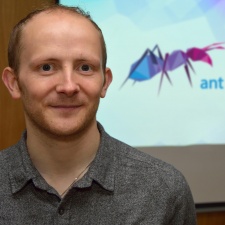 Today, we're speaking to Tony Gowland from Ant Workshop, who submited Dead End Job to The Big Indie Pitch at Abertay University in Dundee 2017 and walked away as champion.

Tony Gowland: Ant Workshop is a micro studio I set up in 2015 to make games with an off-beat sense of humour. I’d spent quite a few years by that point working for other companies making things like GTA and Call of Duty on handheld and mobile, and making things that made me laugh really appealed.

And when I say 'micro studio' that’s really a fancy way of saying 'it’s just me'. I use freelancers a lot though, for things like audio, artwork and PR.

It came about because I was thinking of interesting takes on the twin-stick shooter genre. Initially it came from the idea of making a shooter without any shooting, hence sucking ghosts into a vacuum cleaner - yes I am quite a fan of Luigi’s Mansion, I’m not sure how you knew that?

The art style comes from a combination of the team’s love of 90s cartoons and also a desire to do something that felt quite different for the genre. There are a lot of pixel art twin-sticks and we wanted to try and do something bright and eye catching.

It helps that Joe Blakeston - the lead artist - has worked with Aardman in the past and has a feel for doing the squishy cartoon look.

How hard is it to survive as an Indie developer?

It’s definitely competitive out there. So many people are making amazing games that you have to be constantly thinking about how you can get your games in front of people and how the game’s going to convince people it’s worth them giving it a shot when you do.

I love the Big Indie Pitch events and I’ve done quite a few of them now with different games. The judges are always super friendly and the time flies by, five minutes doesn’t last nearly as long as you might think! It probably helps if you really enjoy talking to people about your game.

The Big Indie Pitches are always really useful in a bunch of different ways. You get a lot of practice honing your game’s elevator pitch, figuring out which bits people respond well to and what questions they often ask.

You get a lot of first impression feedback on your game to see if that core loop really hits the mark and people 'get it'. And last but definitely not least, you get to introduce some really influential people to your game.

We’re hoping to get Dead End Job finished and released in 2018, possibly even get a seasonal update out for it right at the end of the year.

We do have a few other things going on this year as well but nothing we’re allowed to talk about yet. And who knows, maybe Nick Faldo will finally respond to my LinkedIn request and I’ll get BattleGolf off the ground - NFBG is a game where 100 people are dropped on an island with some golf clubs. Here’s hoping!

How can we tackle the games industry's crunch problem?

The Big Indie Pitch interviews: Puny Astronaut talks relaxation and experiences for everyone