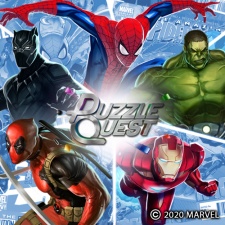 Marvel Puzzle Quest is a free to download match-3 game set in the Marvel Universe featuring more than 200 playable Marvel characters. IGN.com gave it a 9.1 review back in 2013 and it’s even bigger and better today.

It’s a perfect combination of popular genre, popular characters and a great game, so just how much space was there to grow through ASO?

We are Lab Cave. We specialise in 360 mobile growth, focusing on ASO, publishing and monetisation. In 2019, we were approached by D3 Go!, publishers of Marvel Puzzle Quest and pioneers of RPG Match-3 games for Mobile, who were looking for ASO support for Marvel Puzzle Quest, licensed to D3 Go! by Marvel.

We were tasked with managing metadata and conversion rate optimisation across every localisation on both iOS and Google Play stores with an agenda for growth.

Marvel’s artistic output is legendary, which sets the benchmark for creative quality sky-high. All artwork would need to achieve Marvel levels of quality and require approval from both D3 Go! and Marvel’s teams.

The explosion of the superhero genre on screen and in videogames over the last decade gave us a tremendous amount of data to decide which characters and metadata to target. Useful data on popular characters and keywords was available almost everywhere - the app stores themselves, social media conversations, box office revenues and online streaming, comic book and toy sales, and countless other places.

The genre presents a surprising challenge though. We found that trending superhero keywords were mostly searched by men and teens, while all metrics suggest the Match-3 genre has been historically played more by women. Match-3 is also an abstract way of battling, with other Marvel games including Marvel Contest of Champions, Marvel Future Fight and Marvel Strike Force all offering different styles of Marvel-themed action.

At Lab Cave, we searched for ways to better position sets of popular keywords and identified combinations that were not used by direct competitors. A thorough keyword analysis and optimisation was accompanied with new icons, screenshots, and feature graphics (for Google Play) specifically designed to quickly catch the user's eye and convert the new visitor into an install.

One of our most successful creative tests for Marvel Puzzle Quest came with a comic book-themed solution in December 2019. The results were particularly strong in English (US) with a +15 per cent improvement in the conversion rate, and the screenshots were applied also in Portuguese (Brazil), Russian, English (United Kingdom), Spanish (US), Indonesian, Arabic, Turkish and French (France). Importantly, this was real growth from real users, not click-farms or bots.

Additionally, we made a variation of this set for the Japanese market. It also obtained positive results: an improvement of +44.78 per cent in the conversion rate.

In February 2020, we used the comic book approach once again for two of the assets along with a third, mixing iconic characters and the fame of Thanos as a main villain in the Marvel films.

The Thanos variant achieved great results and was applied in English (US), Portuguese (Brazil), Russian, English (UK), Spanish (US), Indonesian, Vietnamese, Italian, Japanese, and Turkish, among others.

Recently in May 2020, our team at Lab Cave trialed multiple Spider-Man graphic variants as we had identified the wall-crawler as attention-grabbing and it brought a considerable volume of app store traffic. We drew inspiration from two major visual references from outside videogames (Spider-Man: Homecoming and Spider-Man: Into the Spider-Verse) and the results were very positive.

Variant B (Spider-Man with Iron Man) was applied in a majority of languages, such as English (US and UK), Russian, Spanish (Latam), or Indonesian. Meanwhile, Variant C (Spider-Verse) showed great numbers in Portuguese (Brazil, with a CR improvement of +7.94 per cent) and French (France, with an improvement of +11.37 per cent)

The new keywords and CRO were so successful at attracting new users that after nine months we had almost exhausted the available users in the chosen Tier 3 territories. Together with D3 Go! we agreed on a new scope for our collaboration - a new deeper focus on our five largest localizations, with the option for D3 Go! to change territories easily. The flexibility of Lab Cave’s business model has allowed Marvel Puzzle Quest to further grow its userbase, this time on a more targeted level.

We love working on Marvel Puzzle Quest. It tests the Lab Cave team’s skills every day, and we enjoy meeting the sky-high expectations fans have for Marvel titles in art and metadata all while featuring some of the most iconic characters in the entertainment industry.

Lab Cave’s partnership with D3 Go! has been ongoing now for more than a year and Marvel Puzzle Quest continues to grow. We hope to continue our great collaboration and bring even more players to the game in the future. Play Marvel Puzzle Quest today on iOS and Android.

Mail hola@labcavegames.com to learn more about growing your mobile app.

From games developers to a mobile growth company: Lab Cave has increased its revenue almost 2,000% in five years with innovation, hard work and data