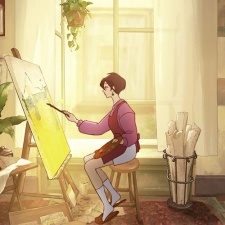 Published by Akapura Games and developed by Silver Lining Studio, we spoke to producer Weichen Lin about how to tell a story from the eyes of a painter and how to knowing when to stop and leave blank space.

PocketGamer.biz: Where did the initial idea for Behind the Frame come from?

Weichen Lin: The idea for Behind the Frame came from a documentary on TV, explaining why and how some of the famous paintings were made, such as the Mona Lisa, or Van Gogh's self-portrait.

I started to think, besides some important events that urged the painter to paint the artwork, there must be some personal reason and life experience that occurred during the painting process.

Then, we started to think, what kind of puzzles and unique stories will happen, through the eyes of a painter?

How could we tell a meaningful and profound story from a different perspective?

How could we tell a meaningful and profound story from a different perspective?

At the start of Behind the Frame, there were only two members working on the story and game design doc in their free time.

It took around six months to really nail down the theme, story and core loop of the game.

Once we had the game design doc ready, we added six members and entered master production. It took another year and a half to finish the development of the game.

The biggest challenge was to focus on the essence of the game, on what information needs to be told, and just as importantly what shouldn't.

Most of the time, we explain ourselves too much in storytelling. But just like painting, sometimes you need to know when to stop painting and leave blank space to let viewers do the rest.

Around eight months after master production started, we had finished all the story plots and puzzle flow of the game. It was the first time I could play through the whole game and feel the rhythm of storytelling and gameplay.

After playing it, it felt like the story-oriented game we were going for. But of course, there was still a lot to be polished.

It has been a great experience! We are all really excited and grateful for the user feedback and we watched almost every stream.

It was really great to see how players interact with the game mechanics and learn from them, and most importantly, to see our story being told and explained by different players and viewers. It was really fun and satisfying.

Even though we are really happy with our current story, we feel that there might be some new aspects of the story that we can explore. Nothing is really certain yet, but we will keep you updated once we figure it out!

I do feel that there's a lot of elements of panorama we haven't really fully used, so we might look into that.

We also want to research different storytelling genres such as horror or action games. But don't worry, we will make sure it is a story that is worth your while!

Behind the Frame is available on PC and mobile.