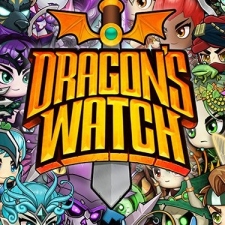 Inspired heavily by Japanese mobile games, the in-development title is a squad-based RPG based on the gacha fusion systems that will be familiar to fans of the genre.

However, with The Secret Police based in London, its co-founders Ric Moore and Harry Holmwood have a different perspective on Asian mobile RPG hits - and specifically, why many of them have struggled to gain traction in the West.

PocketGamer.biz caught up with them at Pocket Gamer Connects London to learn more about the Dragon's Watch project and their ambitions for it.

“If you bring over a game from Japan or China, a lot of the time the day one retention is bad because people just don't understand what's going on,” Holmwood tells us.

Despite this, Holmwood and Moore discovered by data-mining the App Store that revenues and engagement in these games are consistently higher than average.

This suggests that Western players are not averse to the gameplay of Asian RPGs, despite the fact that too few are making it through the opening stages. But this is nothing new.

“I remember the first time I played [DeNA's] Rage of Bahamut, and it was a crazily inaccessible, horrible game in so many ways,” recalls Holmwood.

“But it was a top grossing game here for exactly that reason: once you got through that learning curve, it was a really good game. It just didn't want you to find out.”

The theory, then, is that a developer that takes this experience and “smooths off the edges” could reap considerable rewards. But how does a developer go about doing this?

“One of the very first things is that with Asian games, you have to wait for this update,” considers Moore. “I've waited up to an hour sometimes for Chinese games, so that's something we wanted to mitigate.

I've waited up to an hour to update some Chinese games.

“We stuck a lot in the initial download from the App Store, but also we don't bundle stuff, so later content you only download when you need it rather than up-front.”

Another potential barrier - and by no means one exclusive to Asian games - is the fact that games of this kind require an internet connection to play.

This is also something The Secret Police has been keen to tackle, developing a system that allows users to play without an internet connection for 24 to 48 hours - provided they are able to log in periodically to re-sync and allow the game to perform security checks.

But it's not just in technical terms that the onboarding in Asian RPGs often falls short of Western expectations. Another big difference is the focus on storytelling, and the way in which it is delivered.

“That was something we didn't like about a lot of the Asian games,” says Holmwood. “You've got a lot of story at the start, but to me it's never worked very well.”

Instead, Dragon's Watch implements narrative elements with a lighter touch, threading it throughout as the action unfolds rather than front-loading exposition.

Another area The Secret Police has considered is the balance between metagame and core gameplay.

This is why the game adopts a iPod-inspired scroll wheel at the bottom of the screen for arranging your troops - each with their own skills and elements - in a circular formation in battle.

This is not just enjoyable, but also allows for simple, one-handed play.

But the studio is by no means resistant to the auto-play modes that are now near-ubiquitous in the genre, and Dragons Watch will include its own. However, this is another area the team scrutinised.

“When it comes to auto-battle, one of the weaknesses with a lot of games is that it effectively arrests your phone while you leave it on,” explains Moore.

One of the weaknesses with auto-battle is that it effectively arrests your phone.

“You can't use Facebook or whatever… that's a bit punishing.”

The Secret Police's approach to changing this - alongside, rather than instead of regular auto-play - is a mode inspired by idle games in which squad members can be sent off to complete missions independently.

“We wanted to make a system where it's more like you can set stuff off and then you come back and collect the rewards,” says Moore. “You have to keep checking in.”

Not only does this create another engagement loop and allow players to make progress even when not actively playing, but it also encourages the player to keep all their characters levelled up rather than focusing on just a few.

The Secret Police is still small, taking a Supercell-inspired approach to careful recruitment and slow growth, but it's got big hopes for Dragon's Watch - hopes that go beyond the game currently in closed beta.

“Dragon's Watch is a brand… when we got our business cards printed we immediately thought there's a card game here we need to make,” says Moore, splaying a colourful deck.

“We've got 600 or so characters, and we'd like to reuse them somehow in another game.”