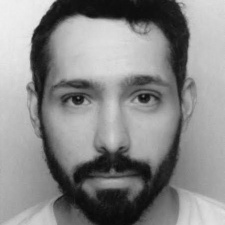 This time, the spotlight is on Jonas Georgakakis, Art Director at Subway Surfers co-developer Sybo.

Jonas Georgakakis: My official title is Art Director. Over the years, I have realised that this role can be many things, depending on the studio.

At Sybo, an Art Director is in charge of the visual and narrative direction of a project while at the same time being very hands on.

For me, that means I still get to do character modelling and texturing, which is my biggest strength and something I really love doing.

I also spend quite some time juggling the suggestions thrown at me from all angles - especially from the two creative founders, who rush to my workstation every now and then to share the great ideas they had last night before falling asleep.

You can easily get lost and disconnected in a big office, in my opinion.

In addition, I am the employee that has been around for the longest, which means I have the company culture and values in my DNA by now.

We have a pretty culturally diverse studio and somehow I am the grand old man at age 31.

I studied as a Computer Graphics artist at The Animation Workshop here in Denmark and graduated back in 2011.

I got a Character Art internship at Lionhead (#neverforget) in England. I was offered a position there but felt that I wanted something where I could get my hands dirty and be a part of something smaller.

You can easily get lost and disconnected in a big office, in my opinion.

I decided to politely decline the job offer and head home to Denmark, where I had got in contact with two former students from The Animation Workshop - Sylvester and Bodie, the SY and BO of Sybo.

They had just received some funding to create their own mobile game studio where I was to cover for Sylvester while he went on paternity leave.

Initially it was a one-month hire, but when Sylvester came back they really loved the stuff I was doing so I became part of the team.

This was back when everyone thought they were going to make easy money on the App Store. There was a lot of excitement and enthusiasm, to put it mildly.

The initial plan was to make a small, casual game every month until we hit the jackpot.

Noobs. It took a year of failing and learning until we nailed the concept, made a swift prototype, teamed up with Kiloo and channeled our love for 90s hip-hop to make Subway Surfers - which went on to become one of the most downloaded games of all time. Ever.

Fast-forward to now, and Sybo has grown from five to 60 people and - somewhere along the way - I grew into an Art Director.

Yes and no. I always loved drawing and playing computer games, but it was not until halfway through my studies I realised that I should probably marry the two and do game art.

I feel really fortunate that I get to do this kind of work for a living.

My mum always said she thought I was gonna end up doing advertising because my drawings made her laugh.

And while she still does not really understand what it is I do, at least now she feels more at ease when thinking back on all the hours I sat in front of that “stupid screen”. It was just research.

If I take a step back and look at my life, I feel really fortunate that I get to do this kind of work for a living. On top of that, Sybo gives me a lot of creative freedom due to art being so highly valued here.

I also get to bring my dog to work, so thats nice.

I learned a lot at The Animation Workshop, but back then it was more focused on animated movies which meant you had to heavily control your own curriculum if you wanted to end up with a game art portfolio at the end of the three years.

These days, they are just as focused on games and I can definitely recommend it. It is an amazing little school with a very personal touch.

To supplement my classes, I joined online forums to spar with other artists. I especially learned so much from Polycount, which is a really good place if you like stylised art.

My best advice is to be naive and do what you think is cool, all the while asking questions from people who are even cooler than you.

If you have spare cash, there are a lot of good courses out there. I recently took a course at BrushForge to step up my hand-painting skills.

That it is a lot about getting to know the right people and being at the right place at the right time. It does not matter that you are the Van Gogh of game art if no one has heard about you.

And once you have a job, it is all about the project. Game art is a visualisation of code, and code is dictated by game design.

As an artist, it is easy to get too hung up on look and style. At the end of the day, what you are actually doing is simply translating strings of text into images so the player knows what the hell is going on.

You need to understand your own strengths and how they could benefit a project. What you have to offer. And you also have to be honest with yourself.

Look at what your peers are doing. Do you need to step it up?

When you make games, you are a part of a team - unless you are one of those rare one-person-armies. Sooner or later, you have to learn how to communicate.

So get a network of people - in real life or online - who give you honest feedback and support. Not only will they push you forward, they might end up hiring you one day.