CEO David Whatley on the journey from MUDs to mobile PvP 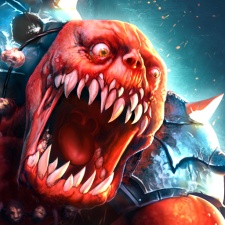 Simutronics has been committed to multiplayer gaming since the early days of video games.

The first game to come out of the US studio was GemStone in 1987, a multi-user dungeon (MUD) that had players coming together in a real-time, text-based fantasy world.

And its latest, the newly-launched Siege: Titan Wars, holds that same central ambition at its core while benefiting from 30 years of technical advancements.

Indeed, the fact that Siege: Titan Wars is a free-to-play, 3D, real-time PvP game that can be played on powerful devices we all carry around in our pockets shows just how dramatic these advancements have been.

But this has also created an incredibly competitive market, which is something the game's publisher Tilting Point is attempting to rebalance in the favour of smaller studios with its $12 million UA fund.

So to learn more about how the partnership between Simutronics and Tilting Point came about, and the current state of mobile multiplayer gaming, PocketGamer.biz reached out to Simutronics CEO David Whatley.

PocketGamer.biz: Tell us a little about Siege: Titan Wars.

You spawn warriors, cast devastating spells and use enormous titans to destroy your opponent’s towers and castle.

At what stage was the game when you came into contact with Tilting Point?

Our process is always to focus on the core game mechanics first. By the time we contacted Tilting Point, we had a fully playable battle that looks a lot like it does today, but with fewer cards.

Working with a traditional game publisher can be a real mixed bag.

It was only playing on PC at the time, which led to an interesting exchange where Tilting Point said to us: “sure, this looks fantastic on a $4,000 PC gaming rig packed with high-end video cards, but how does it really look on mobile?”.

And soon after, they came to visit our studio where we dropped some mobile devices in their hands, playing exactly the same thing.

What were your circumstances before Tilting Point became involved in the project? Did the more traditional publishing route not appeal?

We knew early on that we wanted a partner to help us bring Siege: Titan Wars to market.

We've had just come off of working with Square Enix on Lara Croft: Relic Run, and have worked with other publishers such as Microsoft in the past.

These experiences certainly gave us some pause, because working with a traditional game publisher can be a real mixed bag.

Sometimes good, sometimes horribly bad (and usually some measure of both within the same project). So signing up with another publisher was something we dreaded.

When we came across Tilting Point, we found someone trying something new. Essentially, a company that focuses on bringing titles to market, but not on the development of them.

This was perfect, because we could handle development ourselves, and frankly much better without publisher input), but we knew we needed help in marketing, PR, user acquisition, live ops, data science and so on.

This is what makes Tilting Point unique and a perfect fit for us, and I think a lot of other independent developers too.

With a history of multiplayer gaming going back to MUDs, why do you feel that the time is right for real-time mobile PvP?

I can't honestly recall a time when the time wasn't right.

I can't honestly recall a time when the time wasn't right for PvP.

We did real-time PvP in text-based games 30 years ago with games like Orb Wars - perhaps the first example of a Counter-Strike experience - and in 3D graphics soon after with CyberStrike. All before the internet was a thing.

But the genesis of Siege: Titan Wars was actually borrowed from the StarCraft mod scene, where a genre of mod dubbed 'Tug of War' had shown some significant popularity.

In these types of mods, two players would square off with a base at each end of the map and spawn troops to try and push the front-line towards the enemy and sack their base.

The basic game design concept was the idea of one of our artists who was a fan of this type of StarCraft mod.

How do you feel that your experience has been an advantage when it comes to designing for mobile?

Another mixed bag. The depth of technical experience we have certainly makes the development process much smoother and extends the technical risks we can take on.

But global real-time PvP over networks that radically vary in quality is a steep technical challenge to get right.

In other ways, our experience has not done us favours. The truth is, the mobile market is nothing like the game development space I grew up in.

So many great games are developed these days that get no attention at all, but if something like that came out a couple decades ago it would have been mind-blowing.

And I'm just talking design here, not anything related to the advancement in hardware.

Mobile game development requires a very different mentality. Free-to-play is an entirely different landscape of design challenges, many of which run counter to the way one might traditionally design a game.

Making the mental shift has been a challenge for us, and maybe less experience with the "good ol' days" might be more advantageous. Less to unlearn, so to speak.

Do you feel that the market pressures leading to the formation of Tilting Point are concerning? How big a task is it for developers of your size and smaller to compete?

The good news is that, since about 2008, the barriers for small developers came crashing down.

It is becoming monumentally difficult to get any marketplace attention.

One no longer needs an EA or Activision behind you to get a game into the marketplace.

But this also opened the floodgates. There are so many new titles, noteworthy titles, coming out each and every day, that it is becoming monumentally difficult to get any marketplace attention.

This is where a company like Tilting Point really helps. But even then, the mountain is still hard to climb for all but the biggest organisations.

This is one reason why Simutronics joined Stillfront Group in 2016. Now, being part of a global, publicly traded organisation gives us the resources necessary to prevail in an increasingly challenging marketplace.

I think the little guy will always struggle - it's just that the nature of that struggle is always changing.