I think it’s worth the risk 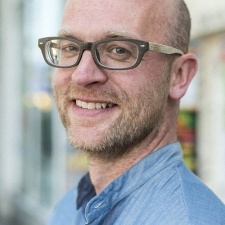 Dan Pinchbeck is the creative director at the British-based studio The Chinese Room. The firm is a subsidiary of Sumo Digital.

The jump from being completely independent to financially backed and owned by a larger firm is one many studios dream of.

More budget, more developers, and more security are all important but so is the ability to pursue ideas on a larger scale and bring them to platforms unimaginable when self-sustained.

British game developer The Chinese Room was picked up by Sumo Digital in August 2018, after the studio went dark for a lengthy duration, resulting in the loss of all but three employees.

A year on from the acquisition and TCR has moved to a stage with multiple projects in the pipeline, as well as its first foray into the world of mobile.

Alongside working on a new project for Apple Arcade called Little Orpheus (due for release sometime in 2020), the company is porting a version of its critically acclaimed first-person adventure Dear Esther to iOS.

After beginning life as a free mod, the game was commercially released on PC in February 2012 before arriving on console in September 2016, generating over one million sales throughout its lifetime.

During Gamescom, we spoke to The Chinese Room creative director Dan Pinchbeck about why he felt it was the right time for the studio to move to mobile, how the firm will combat the difficulties of premium and the business transition since Sumo Digital’s buyout.

PocketGamer.biz: Can you tell us about Dear Esther and why the game felt right to bring to iOS and iPad?

Dan Pinchbeck: I think Dear Esther has been an interesting one, as when we released it on PC we had no expectations. We hoped it would sell maybe a few thousand units so we could payback license fees for the engine etcetera. But it did amazingly well, then when we put it on console it found a whole new audience there.

I genuinely and quite passionately believe that as both developers and players it’s really important to value media and content.

As a company, we never really had the bandwidth to think about bringing the game to iOS - even though the idea was floated around.

Joining Sumo Digital in 2018, suddenly expanded our capacity to be able to do multiple things at once and engage with other development studios. The timing felt right to do something we were never able to do as a small independent studio.

The nice thing is we know the game works. We know people like it, so there are no concerns there. It’s not that horrendous anxiety of will this work, will it take off? We’re fairly confident that a decent number of people will like it.

What countries is Dear Esther being launched on?

That’s still a little bit open at the moment. It’s got full localisation in it, so we’ll start with the first wave and see where it goes. Dear Esther has an international fanbase, so obviously we’ll try to replicate that and serve as many countries as we can.

How about a date of launch?

Some point in 2019 – definitely before the end of the year. I imagine Q3 but we haven’t got it fixed yet.

No, not at this time. It’s still under discussion.

Will the game arrive on Android anytime in the future?

Let’s see how it does on iOS. I hope so. If it does well and people like it on mobile, then we’ll definitely be looking to push it across to Android as well.

What sort of numbers would you consider a success for that to happen?

I don’t know. On a business level it’s more is it financially viable. Also, because Dear Esther is an older game and it’s so associated with the studio’s history, you’re obviously looking for a positive reception from players. I’d be happy with 'X' number of units and people love it than a higher number of units and people think it’s “meh”. That to me is less justification.

We’ll see how it lands. We’ve got Little Orpheus in production for Apple Arcade too, so it’s also about us as a studio going on this whole new platform, which we’ve not been on before and really about us finding our feet.

The mobile market is known for thriving off free-to-play mechanics, how will you look to overcome this with Dear Esther?

So because of the type of game it is, it doesn’t exactly lend itself to anything but what’s in it. I can’t imagine gating it. The only possible way would be to take an old-fashion shareware model, release the first chapter for free and then pay to unlock the others.

I think it’s worth the risk going on premium. I genuinely and quite passionately believe that as both developers and players it’s really important to value media and content. We have to say: if you want the experiences that are slightly different, whether that be a game like Thomas was Alone or Her Story, it costs. As players we should be supporting those costs.

In a similar way, if I’m doing a free-to-play game and I’ve been playing it for a few hours, I’ll just pay for it because it’s the only way that content gets created.

I think Dear Esther is worth being a premium title for those people that want this type of content. They shouldn’t have to engage with gates in that case, as it would take away from the experience as well as the user’s decision to make the purchase.

Will you look to bring other releases like Everybody’s Gone to the Rapture to mobile devices in future?

We’ll see how it goes. The way we are going as a studio is that we’re evolving quite rapidly under Sumo. We’re looking at our historical passion and obsession about storytelling while producing games that are sitting within different genres.

We have a five-year plan for the first time ever, which is really nice. We’ve got a sense of how we are going to build, grow and develop.

Little Orpheus is a classic 2.5 side-scrolling adventure but it’s got a lot of emphasis on the story and world. With Dear Esther, because it’s such a simple game in a lot of ways if it did really well, I think certainly we’d look at doing this again.

How have things changed since The Chinese Room was acquired by Sumo Digital?

Pretty radically. The last title we made before joining Sumo was for Google Daydream, So Let Us Melt. Back then we were 11 people, today we’re 35 and growing. We have two projects: one in production and one in prototyping. Both are action-adventure titles but are very different in terms of what each is.

For me, it’s felt like an amazing opportunity to evolve the studio and say we don’t just make walking-simulators. We happen to have made a couple of them because we’re good at it and people have asked us to do them again, but it’s never been the aspiration of the studio to just focus on that.

As creative director, it’s really exciting to work on games that I’ve wanted to build for years.

Has the business strategy changed since the acquisition?

Yes, there is one now. [laughs]. As part of joining Sumo, I started working with Ed Daly who is the head director for The Chinese Room and has 20 years’ experience. He comes very much from that strategic business development direction. Jess Curry and I had pretty good instincts but we were completely untrained and fundamentally creators.

Now we’re in a position where Ed and I negotiate on where do we want to go next and how are we going to get there. We have a five-year plan for the first time ever, which is really nice. We’ve got a sense of how we are going to build, grow and develop.

What do the next 12 months look like for the company?

Ship a title. Move into pre-production on another. Probably go on to a full two projects as soon as we have shipped one. Dear Esther will come out. We’ll continue to grow, continue to develop the team and continue to explore what we could be doing.

We’ve got to move as we’re running out of space in our office. It’s a real positive sign that we’ve been in the spot for a couple of years, so to see that we’ve outgrown it is quite a big thing.