From film to games 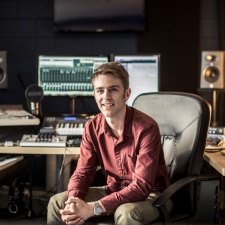 Christopher Larkin is a freelance composer and sound designer best known for his work on Team Cherry's Hollow Knight.

The games industry plays host to a cast of colourful and diverse individuals, from artists and coders to narrative designers and studio heads.

This time we spoke with freelance composer and sound designer Christopher Larkin.

I actually started making music for my own games when I was around thirteen on Game Maker on Windows 95. At the same time, I was learning to play the piano as my dad was a music teacher and he introduced the concept of improvisation and making up new music on the spot.

More so, he was teaching me that the piano to be more as a tool than a musical instrument, so I was learning how to compose music while I was discovering technology. I stopped this after a while and decided to focus on music attending the Elder Conservatorium of Music school in Adelaide.

While there, a producer from a film school of a different university who was looking for composers got in touch with my teacher and myself and another student were chosen.

If university is not an option, the internet is becoming better and better in terms of the resources

I ended up getting the gig which was a short film by the students. That went really well. Games came back in later on, so I was developing my craft. I knew a friend of a friend that wanted some game music it went from that.

Definitely, before I went to music school. Yes: video game music. No: film music, so it’s funny that was the first thing I started with.

I studied music composition at the Elder Conservatorium of Music but I also did a bit of music technology while I was there. There were a couple of short courses on film music there too. I’d highly recommend university even though it is expensive.

If you can afford to go it’s highly beneficial because not only can you learn a lot but you will have a lot of time to develop your craft, while learning about how the masters did their stuff. It does take a long time to develop these things as well as to earn money from your craft.

If university is not an option, the internet is becoming better and better in terms of the resources you can get your hands on.

To the point that if I had to start all over again in some other area of creativity - like programming, which I’m considering - YouTube will be my go-to for that.

That is an interesting and very good question. It’s probably the spontaneous moment when you come up with a really good music idea and that feeling that it’s going to work, followed by experiencing it as the whole project comes together. That feels really good.

I actually enjoy the hand-on process the most, not to discredit how much I enjoy good feedback from people I work with.

How did the opportunity present itself for you to compose the Hollow Knight soundtrack?

I found out about Hollow Knight when it was a Kickstarter campaign. I knew the Team Cherry director Ari Gibson from some other projects.

If university is not an option, the internet is becoming better and better in terms of the resources

There were a lot of other composers pitching their work, so I decided to make a demo and sent that through. Team Cherry being based in Adelaide helped too. Make physical contact if you can but if not reach out over email or Twitter.

What were your main inspirations for the soundtrack? Any particular games stick to mind?

The brief I got from Team Cherry was that the soundtrack had to evoke a sense of melancholy and dark elegance. This was because the score was for an underground labyrinth world that was once prosperous but has now fallen into ruin, so the experiences of these places that you walk through give a sense of something happening prior.

The music is supposed to design the sense of the memory of what was before - something that has been lost.

In terms of inspiration, Studio Ghibli composer Joe Hisaishi who has written quite a few soft, piano tracks like The Sixth Station from Spirited Away stands out most.

Do you think there are any misconceptions surrounding game music?

Something that gets passed around a lot that is if you don’t notice the music then the composer has done their job.

I disagree with this to an extent because sometimes it’s not to say the music should be really noticeable and take over the experience, but I think providing the music is reinforcing the narrative and gameplay, it can be a bit louder or more of a statement.

I would have valued having some tutorials or some help with putting together a contract.

Also, how to handle situations at the start of a collaborative relationship whether that be a developer or filmmaker. What are good steps to take? In some cases, I’ve forgotten to ask for something or possibly asked for too much.

Keep sketching. Keep writing and creating. It’s good to master your instrument. On your instrument try to play the music of composers you really like so you can understand how they wrote it as an exercise. #

Also, get plenty of sleep and eat your vegetables.