Super Arcade Racing dev OutOfTheBit on not compromising on your vision 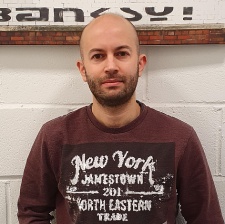 This week, we spoke to Ali Motisi, the founder, director and lead developer of London-based OutOfTheBit.

PocketGamer.biz: How did you get started as an indie game developer?

Ali Motisi: I’ve always had a passion for coding in general which, in time, mixed up with my love for great games.

I started programming when I was a kid, when I received my very first computer for my 8th birthday, a BBC Master compatible. It was a fantastic machine. I self-taught myself to program in BBC Basic and then moved on to the Commodore Amiga.

I appreciated the innovative programs it had, such as Deluxe Paint and Lightwave 3D along with the groundbreaking games that were available for it. Those years spent playing around with those pieces of art laid the foundations for who I am now.

After graduating in Computer Engineering I moved to London to develop games. At that time, mobile gaming was starting to take off on the first wave of Java-enabled smartphones.

Developing for those phones was very challenging and there was a lot of fragmentation and mobile data was still not that common. So when the iPhone came out it seemed like a revolution, an opportunity. And that’s when I started OutOfTheBit, on my own, with only a laptop.

11 years later, there are eight of us, developing not only for mobile but for PC as well and soon we’ll be on consoles.

What is a typical day in the life as an indie studio?

Do not picture ourselves sitting down for 25 hours a day eating pizza and gulping down fizzy drinks. Well, not all of us at least.

We’re quite a mixed group: some of us only eat soups, others gobble down protein shakes and spend their lunch-breaks lifting. And we do take some time to chill in our gaming room, with our Sega Mega Drive and Super Nintendo, playing old classics.

Since we do program most of the time, we try to have regular meetings (our Friday pub lunch is a must) and chats during the day on the ongoing projects to touch basis between different roles and make sure we don’t fall behind.

For us, success is to release something that people enjoy and that they’ll remember for years to come.

We stay independent but we can be quite strict with our deadlines.

Although we’re based in a very inspirational place, Merton Abbey Mills, in Wimbledon, where William Morris used to have his factory beside a river, we like to change location for our meetings, both for brainstorming and planning.

It’s really helpful to change context especially when working on something new.

It’s a tricky business. Sometimes you work on a game for a long time and then you don’t make much money out of it. Other times you build something quickly and it’s a roaring success.

It’s hard to predict how the market will react to your game. It’s also an industry that is always changing. Three years ago the Nintendo Switch wasn’t even out and it’s now amongst the top selling consoles!

How do you define success?

There are many ways to define success. For us, success is to release something that people enjoy and that they’ll remember for years to come. Take Super Arcade Racing for example.

We could have just developed a simple racing game and call it a day, but we went the extra mile and decided to add a story to the single player campaign.

To do it properly, we decided to expand the team and look for someone you could draw comics. And that’s when Dave Swan joined us. And what an addition that was! Not only Dave is an amazing illustrator, but he is also unbelievably good with pixel art (both static and animations).

In fact, Dave has worked on a number of commercially released games, including Sega Mega Drive games (such as Wolverine).

Can you explain a bit about your approach to pixel-based game development?

We are really old-school when it comes to our tools. We’ve basically created everything from scratch. We have a custom-made program for creating pixel art and animations (it supports touch screens and pen input).

In regards to the music, we’ve combined the best from the 8-bit and 16-bit era by designing and coding our own tracker that can play music off samples together with our own synthetiser.

Super Arcade Racing is an honest arcade game. A 2D top-down racing game inspired to the 16-bit classics of the 80s and 90s, with a real pixel graphic, an entertaining storyline and an iconic soundtrack.

Our advice is to make the games you’d like to play yourself and don’t compromise on your vision.

You play as Mick, forced to take part into an underground tournament to save your brother and along the way you’ll discover a few dark secrets about your family.

There are more than 60 levels to play on different terrains and weather conditions in the single player/story mode. You got bosses to defeat in order to progress and every level is harder than the previous one but you’ll have the chance to upgrade your car to be more competitive.

Multiplayer has different levels and you can play up to 4 players on split screen on the PC version.

What are your plans for the future?

For us, Super Arcade Racing is the start of a bigger vision. We’ve got two more games of the same style coming out next year and more in the pipeline.

Everyone is making 3D games with Unity and that’s fine. We love Unity and there is a market for that. But that’s not what we are. We like to make everything from scratch, top to bottom. We like having full control of our tools. We love the look of standard definition pixel graphics. We love sweating every single pixel and tweak an animation until it feels just right.

3D is great but it does contain the way you do animations. Think about the difference between the classic Disney animation films such as The Lion King and Aladdin and compare that to the latest 3D animation films.

Everyone seems to have the same facial expressions in the latest 3D films. This is not a dig at 3D, which can be beautiful in its own way, it's just not what we prefer.

Coming back to games, it feels like standard definition pixel graphics it’s becoming a lost art and we’re here to play our part in keeping it alive and modern. You can think about our games as new games for a beefed up Sega Mega Drive or Super Nintendo.

It’s a hard question as we’ve got so many ideas! I’d love to build a really big open world pixel-based game. Something that you couldn’t do with the limited memory of older systems.

I’d love to put some really clever AI in the game and access to the internet so that lots of people could play it at the same time.

Our advice is to make the games you’d like to play yourself and don’t compromise on your vision.

You can find out more about OutOfTheBit and its games via its website.