"I was working at Disney Interactive/Playdom in California while my significant other was still living in Ontario, Canada" 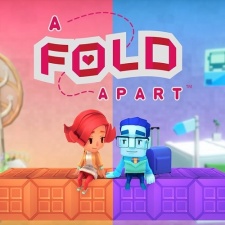 This week we spoke with Lightning Rod Games co-founder Mark Laframboise about the making of A Fold Apart.

PocketGamer.biz: Can you start off by telling us about A Fold Apart?

Mark Laframboise: A Fold Apart is a puzzle game that explores the emotional rollercoaster of a long-distance relationship — in a world of folding paper.

The initial idea for A Fold Apart was based on my own experience with a long-distance relationship. Prior to founding the studio, I was working at Disney Interactive/Playdom in California while my significant other was still living in Ontario, Canada. We were living three time zones and half a continent apart for almost 1.5 years.

Prior to founding the studio, I was working at Disney Interactive/Playdom in California while my significant other was still living in Ontario, Canada.

There were a lot of emotional ups and downs that we both went through while living apart from each other and I thought that creating a game that was based on that story would be interesting. However, I wanted to have gameplay that also helped reinforce those emotions and didn't know how to do it at first.

A while later, my co-founder Steven and I were brainstorming cool gameplay mechanics we hadn't seen before and he came up with the great idea of folding papers like the back of a MAD magazine.

That ultimately led to the initial design pitch of A Fold Apart: if you have a character living on one side of a piece of paper and another character on the other side, they're in two entirely different worlds. But, if you fold that paper in half, you can merge their two worlds together and create a way for them to reunite.

Folding paper served as a good metaphor for living apart from someone you love where you just wish you could mash your two worlds together.

We have been working on the game for a little over four and a half years (September 2015). Our team has changed a bit over development, up to our current maximum team size of six people: myself (co-founder, game design/project management), Steven (co-founder, technical lead), Stephanie (art director), David (animator), Ryan (programmer) and Kit (game design).

Creating all of the technology surrounding the paper folding was definitely a challenge. Since so much of what we were doing was novel, we had to write a lot of custom rendering and physics code.

Finding all of the edge cases and unexpected behaviours that we've been seeing players run into since launch has proven to be tricky, but we have already been able to find and squash a number of bugs we had never encountered before just based on feedback from our players.

The first time it really felt like we had figured things out and were on the right track was after we took a demo of our first tutorial level to PAX East 2018. We were able to get it in front of hundreds of players and see their reactions in real-time. There were even a few tears at that show.

The opportunity to release the game on Apple Arcade was something that really excited all of us on the team. The mobile space has a lot of untapped potential for game design, but premium indie games tend to have a hard time exploring and experimenting in that design space in a way that is sustainable.

It's been great to see how much my personal experience also rings true for many other players who have been in long-distance relationships themselves.

Apple's concerted effort to support, highlight and nurture these premium mobile experiences on Apple Arcade is something that I think is very important to allowing these experiments and experiences to be shared with the wider gaming community.

The service was a great fit for A Fold Apart specifically because it allows us to get the game in front of a large number of people in our target audience. We also feel that the game design lends itself well to touch controls (we may have missed the mark on our first implementation of the touch controls, but we're currently re-working and tuning them to improve their performance on mobile).

We're incredibly happy! The responses we've had to the game have been amazing, and it's been great to see how much my personal experience also rings true for many other players who have been in long-distance relationships themselves. The constructive criticism we've received has also been really useful in helping us plan where to prioritise our time on fixes too.

We're currently working on improving some of the stability and unexpected interactions that are affecting all of the platforms and then we're going to take another full pass at some of our paper folding touch controls as well since those seem to be a point of contention for many players. We do have some plans for some additional puzzle content as well, but no timelines to announce on that front yet.

While we unfortunately can't share our exact numbers, we are very pleased with the number of people who have played the game across all platforms.

We really enjoyed our experience working with the Apple Arcade team so we are definitely considering possible ways to collaborate with them again in the future internally. We don't currently have any new projects to announce at this time.