"Approximately 50,000 new players per day since its launch" 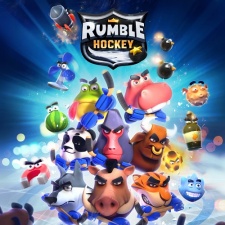 This week we spoke with Frogmind chief operations officer and chief marketing officer Teemu Mäki-Patola as well as lead coder and project lead Panu Tertsunen about the development of Rumble Hockey.

PocketGamer.biz: Can you start off by telling us about Rumble Hockey?

Encouraged by the awesome launch and reception of Rumble Stars – not to mention the team coming from a big hockey-loving country - we wanted to create a version with the sport too. The development of Rumble Stars first began as a hockey game before evolving into football, with both games developed by the same team. Those who like football will find hockey familiar, yet with gameplay differences that give both games their own flavour and twist.

Hockey has faster gameplay and different goalie mechanics that require even more focus on building clever combos to outsmart the opponent. Players who like hockey in general, may hopefully find Rumble Hockey their new favourite. The development of both football and hockey will support and influence each other while giving a broader life to the epic Rumble characters we all enjoy.

Teemu Mäki-Patola: The development of the first Rumble Stars title first began as a hockey game but soon evolved into football, as the sport has a bigger audience globally and the gameplay tests with football mechanics felt great. Six months after launch, the team felt that a hockey version would be a great game as well.

We thought that both sports would have pretty different audiences and wanted to make a great hockey game and surprisingly, there didn't seem to be many hockey titles on mobile. Of course, Finland and our team are both pretty hockey-crazy too.

What was it about Rumble Stars that made you want to continue the series? Can we expect other Rumble titles? Rumble Basketball? Rumble Baseball? Rumble Tennis etcetera.

Teemu Mäki-Patola: Rumble Stars Football had a great launch with a total of over 15 million players in the first year. We first thought about adding hockey as a game mode into Rumble Stars but when we tried the mechanics needed to be much more different. We also wanted arenas that used ice.

Eventually, the game became its own thing, with both football and hockey aimed at different audiences for the most part. However, we've seen that there are players trying out both. We don't have any plans for any other sports games at this time, though never say never.

Teemu Mäki-Patola: It took about nine months in total. A seven people team handled both games, with about half of them working pretty much full-time on Rumble Hockey. Going forward, the plan is to support both games equally. Both titles have pretty clear synergies in our pipeline.

Panu Tertsunen: The biggest challenge was creating a smart pipeline where we could update and change the games individually, yet still share as much as possible to keep the amount of work in check. We still haven't entirely solved this but are getting there.

Panu Tertsunen: No specific moment but there was a point where the noise and excitement in the office peaked. That stood out to me that we have a game that everyone is happy with.

Has the Covid-19 pandemic impacted development or changed the launch in any way?

Panu Tertsunen: It did raise some challenges as we're used to working in the same shared space. The sudden change to everyone working from home caused a lot of miscommunication at the start and did delay development somewhat. At the least, I think some of our programmers have enjoyed the more quiet and focused working environment.

Rumble Hockey has been accumulated approximately 50,000 new players per day since its launch

How happy are you with the game's launch so far and the Content Creator initiative you introduced alongside?

Teemu Mäki-Patola: At Frogmind, we really believe in our content creators. We started a new Creators Program that gives participating content creators a 100 per cent share of the net revenue that is generated during the first 30 days from all new players who install Rumble Hockey via their personal link. They are supporting the games and being community drivers.

We love the idea of paying the benefits directly to them instead of paying to the massive advertisement agencies for visibility in their networks, which also leads revenue away from the games industry.
Over 100 creators from 30 countries have already joined the program and it has been a much bigger success than we expected. We will definitely continue on this road and try to build long term win-win relationships with the creators to support the games.

Teemu Mäki-Patola: Live ops are a key part of our games, with new events every day which help to keep the game fresh. The tournament feature was actually a massive undertaking and it works nicely with tiered rewards as well as dropped players that are able to chat and spectate the rest of the match.

We have updated Rumble Stars roughly every eight weeks with new content and game modes and about once a month with balancing and fixes. Going forward we expect to keep roughly the same rate for both games.

Teemu Mäki-Patola: Rumble Hockey has been accumulated approximately 50,000 new players per day since its launch on May 19th alongside a healthy number of daily average users because of this. About one-third of players originate from the Creators Program, which is a great success for that and we have seen creators actually making money for themselves while the community of the game grows.

Teemu Mäki-Patola: I can say that the next game we have planned for this year is a surprising one. It's not exactly a game though, although it is very much about games. The vision for that one is insanely bold for a studio of our size and aims to be a potential disruptor.

We have butterflies in our stomachs just from the thought of release. If received well, it could potentially change a number of things in the industry.