What do living room board games and mobile games have in common? Real-time interactions

"Being able to communicate in real-time with your teammates can make or break your gameplay." 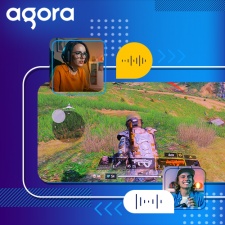 By Agora.io director of games and social Mike Lopez

From nights spent in the living room with the game of life spread out across the coffee table, to sitting at a computer desk playing a multiplayer RPG game with friends from all around the world, gaming has evolved but at its core continues to stay to true to one thing: interaction and engagement among players, whether you are sitting across the table from each other or are in front of a digital screen.

As gaming has evolved from traditional board games to virtual worlds on digital platforms, the ability to enable authentic interactions among players is essential in what makes gaming, gaming. Being able to communicate in real-time with your teammates can make or break your gameplay. Most games developed for digital platforms require some type of real-time communication tool to engage, connect and interact among players, whether that’s through direct messaging chat boxes, voice chat or streaming video to see each other in real-time.

Real-time engagement features in gaming become especially important when playing in a multiplayer environment, whether that is on a console, computer, or mobile platforms. However, many games are developed without these in-game communication tools which can create a disjointed gaming experience for the player.

There are various tools and platforms available out there that easily integrate with mobile, computer and console gaming to facilitate real-time communication during gameplay, many of these are typically outside the game such as Discord, Steam and Skype. While these are all great platforms that provide a solution to the in-game communication challenges gamers face, it still requires another platform to be running in the background and takes the gamer out of the game.

This challenge is especially prevalent in mobile gaming, where gaming apps are developed without in-game communication features for one-on-one or group chat, voice or video streaming. By developing games from the start with built-in real-time features for team communication, developers can offer players a more seamless gaming experience all in one platform, ultimately driving greater user engagement, retention, and increased app usage.

Take the game Pokerface as an example. Our team at Agora helped build video communication capabilities into the game to provide another layer to the real-time engagement players enjoyed with each other. After video communication features were added, Pokerface players started to spend more time on the platform - a shift that makes sense given we know if games allow for more player-to-player engagement, gaming time increases.

Pokerface is recording sharp growth with its user base, with traffic increasing to more than 120 million user minutes compared to before the pandemic when network traffic averaged a million minutes. This is true across games - mobile gaming platform Bunch recently improved its video chat capabilities and its user base grew by 200x. This goes to show that people use gaming to come together, especially when it’s harder to connect in-person - and everyone wins if gaming companies add more layers to engage.

The ability to interact over voice and video chat during gameplay makes gamers feel more connected than ever to their teammates and partners, all while staying in the game together and reacting to moments, in real-time like taking down the boss at the end of an arena battle - why wouldn’t you want to see each other’s faces in real-time over video during that moment?

Communicating, interacting, engaging and collaborating together is what is at the heart of gaming. As digital gaming platforms look to incorporate real-time communication features in-game, we will continue to see the traditional elements of gaming further come to life in the digital world.

Nobody cares about your app idea - here's how to change that