"Pako Caravan is a mix of elements from the original Pako games and tried-and-true classic snake games." 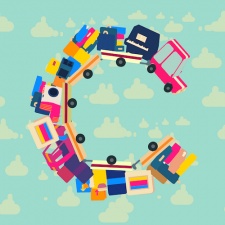 This week, we spoke to Helsinki-based developer Tree Men Games regarding the development and launch of Pako Caravan on mobile.

PocketGamer.biz: Can you start off by telling us about Pako Caravan?

Tree Men Games: Pako Caravan is a mix of elements from the original Pako games and tried-and-true classic snake games. You collect trailers to grow your caravan ever longer, as you try not to crash into yourself or anything else that might pop up in each stage. Additionally, things like jump mechanics, lawn mowing, and tons of other little twists add variety to the gameplay level by level.

Pako Caravan is a mix of elements from the original Pako games and tried-and-true classic snake games.

It has always been there lingering, since the original Pako and the airport level that had a car that had a couple of trailers behind it. But one key thing was to make something very “Pako” but with a twist. The normal Pako concept is built upon navigating a world and avoiding objects, either static objects like trees, buildings etcetera. or moving objects like cop cars.

Here we thought, what if you are actually responsible for the obstacle course yourself, with the trailer caravan making you the actual building? We also wanted to do something a bit more chill in every way, and we hope the general atmosphere with graphics, music and such supports the somewhat silly idea.

We had the whole team of three working on the game full-time for three to four months.

This was probably the easiest project we have done, maybe because this is our seventh game together. We know the general feel of what a Pako game is and how this small micro-universe allows us to do things - nothing is impossible in Pako games.

There were the usual challenges such as figuring out progression, whether there would be enough tasks for every level, etcetera. Each level has 10 tasks equalling 100 tasks in total. After the update on October 23rd, this will be increased to 150 tasks altogether.

Quite early on, to be honest. There was a strong foundation with the core concept and style of visuals near the beginning, so basically after getting the caravan system in place - by picking trailers from the stage, it was the moment we realised it would be a pretty cool game.

Since mobile is the platform we feel most comfortable releasing games on, that came naturally. In addition to how the world is going right now with the global pandemic, and how our previous two games Heli 100 and Astalo were more of making damage-type of games, we thought it would be cool to make a game where you at least thematically build something, while still maintaining that “one more time” feeling.

This was probably the easiest project we have done, maybe because this is our seventh game together.

The game's main audience I'd say are casual gamers that might turn to mid-core or hardcore players. We put effort into the progress system, so that it's easy enough to advance but also that more goal-oriented players have lots of things to do. Beyond that, the leaderboards have been getting quite amazing highscores on certain levels.

For an older audience, we think anybody who has played any sort of snake type of game will pick up the idea fast. We also wanted to leave Easter Eggs to the millions of people who have downloaded previous Pako games, via familiar locations and other small things.

For almost three years we have been working across two different continents (two people in Finland and one person in Canada), so the pandemic did not change too many things in our normal work routine.

Not really. We had a limited beta on Android in few countries as well as a few testers on the iOS side too, however, in the end, we didn’t actually receive a significant amount of feedback.

We are happy about the coverage and very positive reviews. We also received a featuring on the App Store across several countries, which we thought wouldn't be possible with this game. Saying this, App Store impressions are not what they used to be anymore.

So far, we haven't yet garnered as many downloads as we were expecting. Still, we'll see how the game is progressing as we roll out more updates. We're happy to see that lots of people have unlocked every level and ranked very impressive scores on the leaderboards.

We try to follow reviews and listen to the players. After the launch of Pako Caravan, we have already added a new stage and fixed the majority of critical bugs that were mentioned through feedback.

Now we are working to add even more game content alongside an optional landscape mode in the next update later this month.

We haven’t sorted a clear plan for our future mobile projects as of yet. It’s possible that we do something on Nintendo Switch later down the line while also maybe continuing with iOS and Android projects. We are just about to finish a large update for Pako Caravan, which adds lots of new features and four new levels. This will be available from October 22nd, so stay tuned!

Danger at every turn: the making of The Walking Dead: No Man's Land