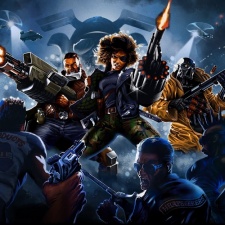 The process of creating a game is difficult, long, and stressful.

PocketGamer.biz: Can you start off by telling us about Huntdown?

Tommy Gustafsson: Huntdown is a retro 2D 80s/90s aesthetic run-and-gun action game, where you choose one of three bounty hunters, each who has their own set of unique weapons and an incredible array of one-liners to colour every occasion.

It has dozens of levels and unique weapons from traditional firearms to lasers and melee options like guitars and hockey sticks. We’ve also brought about the nail-biting difficulty of the era into modern sensibilities with stop-and-pop cover mechanics, generous checkpoints, and no game over screens unless you choose to quit.

The hardest part was how much was left on the cutting room floor.

The inspiration is mostly from games and movies from our youth. It all began when we were discussing games on old consoles and computers that we both grew up with. Some of these old games have awesome features, which have not really been in use since back then.

We started to list in-game features that we liked and then carefully decided functions for a classic setup where the aforementioned features create innovative gameplay. After testing out some demo builds we were hooked, our vision of an action-packed tactical platformer actually worked.

Development started around 2016 and took about four years from the beginning of development to the first console launch.

Honestly? Game development has a lot of challenges and different people on the development team (there are about six of us) might say a different aspect is the “most” challenging.

Although, I would say that we all had so many ideas for levels, bosses, characters, weapons, story and dialogue that the hardest part was how much was left on the cutting room floor. But the upside is that if we get the opportunity to create a sequel, we already have a great jumping-off point!

As artists, we are definitely our own worst critics. That said, at one point you need to accept that you have done the best you possibly could have. If you don’t let it go out into the world this game is gonna be more than 20 years old. If you love something, let it go.

Once the game was content complete and we felt the controls were just right. That's arguably the most important thing to get absolutely perfect when putting a game like this on mobile.

We want Huntdown to be timeless and last for many years to come...

It seems people from all walks of life really enjoy Huntdown. A lot of players who were around in the 80s really get a lot of the smaller references and easter eggs we've scattered throughout. Anyone that jumps into the game has thankfully been able to find something they love about it.

Just like young folks that hold 80s-themed parties and how pinball arcades are coming back into fashion, you don’t need to have been around in that era to have a lot of love for it,

Huntdown was in early access for a while before launch and though there were no big changes, there were a lot of small adjustments to get the game feeling just right. A big part of that was down to our game testers and the player feedback.

Has the COVID-19 pandemic impacted ongoing development in any way?

We are such a small and already introverted bunch of folks that it hasn’t really had any major impact on the game. Plus the original console release was pretty much ready to go when the pandemic hit.

We always wanted to make Huntdown accessible to everyone, so that’s why we’re releasing across most platforms - including mobile. For example, we want Huntdown to work with as many controllers as possible while supporting as many screen resolutions as it can.

Whenever something new shows up we make updates to the game as soon as possible. We want Huntdown to be timeless and last for many years to come, as we're convinced these types of games don’t age.

We just did a major update in terms of a new mode we have added (for free) called Arcade Mode. Of course, you may be thinking, how much more arcade-like can this game get? The answer is, a lot more. We feel the new mode adds a ton of replayability value as well as a new challenge for our healthy speedrunning community.

As of right now, we are hyper-focused on getting Huntdown out the proverbial door for every possible delivery method we have planned. This means we still have a few more exciting announcements to make in the very near future. Once that happens, we will start thinking in a more focused way about the next steps for Easy Trigger.

So for now, stay tuned, because we’ll be dropping some megaton news sooner than you think!