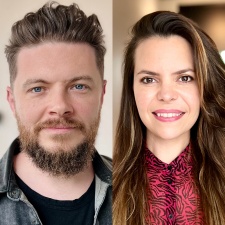 Jones and Velasco have cut their teeth on some of the biggest titles in mobile – with Jones the creative director of Star Wars: Galaxy of Heroes, which has to date generated around $1.4 billion in revenue, and Velasco a principal member of Zynga’s Words With Friends franchise and Top Eleven: Be a Football Manager.

Moon Tavern, which will be based in Texas, US, aims to, according to Jones, “[bring] the nostalgia, meaning, and craft of classic RPGs and adventure games to the modern magic of mobile technology”.

Velasco added: “We’re not looking to port old games into new devices, we want to reshape the meaning from old experiences into the new patterns of play.”

An untapped gold mine of classic experiences

Jones and Velasco spoke with PocketGamer.biz on their ambitions for the studio, and meeting that elusive combination of classic RPGs with mobile UA and retention techniques without dissuading the more traditional audiences often associated with the genre.

PocketGamer.biz: RPGs are among the most popular genres on mobile, although not many have the cadence and nostalgia of formative RPGs found on the SNES. What is Moon Tavern's model for bringing together "classic RPGs [...] using the modern magic of mobile gaming"?

Jones: I feel there is an untapped gold mine of classic experiences from the pre-internet age that have not yet been mapped to modern multiplayer system design or play patterns around current technology.

Back in the day I would sit in front of a computer or console for long marathon sessions and even though nowadays I might play a mobile game for the same number of hours over the course of a week, I see it as the same potential for deep experiences and for playing those with others. The kinds of games that are portals to other worlds that stay on your mind until you can visit them again.

Another element that is also rare in mobile games is any real sense of mystery or discovery beyond the path that has been designed for you and that is something we’re thinking deeply about.

Velasco: I grew up playing all kinds of games as a kid in the '90s, but my best memories were playing RPGs with my older brother. Some of them were even a bit scary or intimidating for me back then, but I loved them because it felt like we were going on adventures together. I remember being immersed in the story, the music and the voices of the characters would be stuck in my head forever and it made me look forward to our next sessions.

I know that we have a lot of distractions and competing entertainment offers these days, but I would love to bring this magic into Moon Tavern Games and hopefully create something special that people bond over when playing our games.

PGbiz hardly needs to detail the success of Star Wars: Galaxy of Heroes and Words with Friends, but one of the shared qualities between both is async PvP. What role will community engagement have within Moon Tavern's titles?

Velasco: Working on Words with Friends, with such a devoted huge audience and having had the opportunity to spend quality time with some VIP players in person, made me realise how much they care about their active games with other players, not only with their real-life friends or family members, but also new connections that they would create and kept over the years.

Some of these friendships (and love!) stories would even make it to the media or they would let us know personally and this was very inspiring and heartwarming for me and everybody on the team. At Moon Tavern we would love to involve the community somehow and make them feel part of our game, not only from a personal level, but also within the community. We would like to explore how meaning in the game world could translate into meaning in the community world.

Justin: Working directly with the community was one of Star Wars Galaxy of Heroes most valuable experiences as a developer. We tuned and balanced the game alongside (and even recruited from!) our most engaged players. It’s a similar phenomena as fans live streaming Game of Thrones reactions or theorising on Reddit after each episode of True Detective.

At Moon Tavern, we plan to double down on that kind of thing. There is always, and should be, a line between audience and creator but when that right balance is struck the results can be magical.

You mention Moon Tavern's wish to draw in "classic, underserved" gamers to mobile, which can be resistant to mobile's content distribution and monetisation strategies. What is your approach for bringing in this elusive audience without sacrificing some of the most successful models of mobile gaming, such as F2P and IAPs?

Jones: I don’t think the F2P business model and classic gaming have to be at odds. For example, if you were to reboot some of my favourite arcade, console, or PC games in a way that let me spend to experience more of those worlds I would be excited to – as long as they were rebooted with creative integrity and trust between the community and developer, and that I think is the key.

I didn’t think twice about pumping quarters into arcade cabinets or opening boosters of Magic: The Gathering back in the day – it was fuel to keep the fantasy flying. Because we knew that afterwards, we could always take home the memory of our time together or the cards in our collections and keep the adventure going in our heads. Our goal at Moon Tavern is to find a way to monetise our games in a way that fuels fantasies, and always with trust and integrity.

Velasco: We understand the business side as game developers, but we also understand these players' frustrations as players ourselves. Using creativity to make games with a balance between being profitable and at the same time honouring the expectations from players that we want to create for.

It is not an easy task, but I personally see it as an exciting opportunity and I welcome the challenge to make something great and escape from the worst examples of monetisation techniques.

Similarly, it can be hard to align the inspiration of classic RPGs with some of the biggest buzzwords in the mobile space: metaverse presence and blockchain gaming. Is Moon Tavern looking to implement blockchain functionality within its titles?

Jones: We are not focusing on blockchain gaming or the metaverse, though if there is an idea that makes sense for our games or players, we would be open to it.

How large will the Moon Tavern team be, and why was Austin, Texas chosen for the studio's home?

Velasco: Austin is a popular city for tech and gaming companies: there is a pool of great talent there, it is business friendly, has great food, accessible nature, welcoming people, and the vibe of the city is awesome! The smell of BBQ and the sound of live music in the streets inspires us and suits Moon Tavern’s spirit of camaraderie.

We are aiming to try to find the right team size for us to always remain a creative workshop and not a factory and we are excited to explore the opportunities and talent that Austin has to offer.

You've mentioned a focus on classic RPGs, but what lessons will you look to take from some of the most popular RPGs currently live on mobile, such as Runescape and Black Desert?

Jones: RPG is a loaded term these days and can actually mean a blend of different genres. On mobile today you have MMORPGs, squad-based battlers, puzzle RPGs, action RPGs, roguelike RPGs, among others and elements are often synthesised between them.

And a big difference between now and in the boxed era is the live operation of the games with active and contributing player bases that sometimes even create their own content. As a team we are sharing and playing new games with each other almost daily and are building a studio library of the classics at the same time to spark ideas between the two eras.