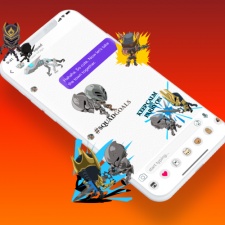 Chair Entertainment has teamed up with messaging app Pundit to create a host of stickers based on its mature fantasy game Infinity Blade.

The slightly bizarre partnership sees Infinity Blade scenes and characters recreated in simple, cartoony animations which can be sent to friends on Pundit. Scenes include "stabbing the God King with the Infinity Blade" and trolls that dab.

Pundit is a messaging app which focuses its efforts on producing stickers for friends to send one another, and allows users to create their own stickers with selfies. The Infinity Blade pack will add 24 stickers and sounds for $1.99.

Keep calm and parry on

"As entertainment creators, we are always looking for fun, new ways to help fans further immerse themselves in the experiences they love," said Donald Mustard, Worldwide Creative Director, Epic Games.

"We love the cool twist Pundit has put on communicating with stickers and we're excited to introduce the Infinity Blade pack to our community."

The first game in the Infinity Blade series launched back in 2010 and was considered a landmark title for iOS with its high-end graphics. It reportedly generated $1.1 million in sales in its first five days of release.