Puzzle game available in countries such as Finland, Australia, Canada, New Zealand and the Philippines 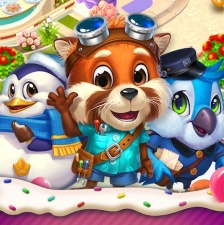 The title is described as a match-three puzzler - though looks more akin to a ‘blast’ game - in which players are also tasked with building up a town and designing their own bakery.

The game was first tracked by App Annie on the App Store and Google Play on July 26th 2018. It’s currently available in countries such as Finland, Australia, Canada, New Zealand and the Philippines.

In 2018 Redemption Games received $5 million investment from Clash of Clans developer Supercell to support its work on developing casual games.

The US company has previously worked with publisher Scopely, though Sweet Escapes is its first release independent of a publishing partnership.

The team at Redemption includes Michael Witz (CEO) and Dan Lin (CTO), who sold their previous company Mob Science to Jam City (then SGN). There they worked on Cookie Jam, one of Jam City’s flagship games.

Check out our previous story on Supercell’s investment in Redemption and its company culture here.