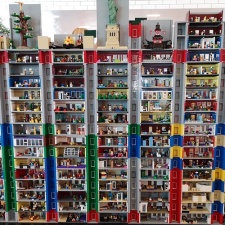 The diorama came in at 21 square meters. It beat the previous record, a 17.13 square metres LEGO Minecraft model.

The LEGO diorama was built by a roughly estimated 1,500 to 2,000 staff and fans at the LEGO House in Billund, Denmark over three days. Some fans even flew in from abroad to take part, including a group hailing from Italy.

The model consisted of 554 rooms built by fans, 524 elevator shafts and 30 toppers, with each tower reflecting the layout of the game. Approximately 400kg of LEGO bricks were used in its construction.

LEGO Group associate marketing manager Edgaras Racinskas, who organised the event, told PocketGamer.biz that the team wanted to do something for the fans, as well as celebrate a new era of LEGO mobile games. It’s the first time the LEGO Games team has held such a building event.

“I think there's no better place than this to make sure that if the LEGO fans, advocates, AFOLs (adult fans of LEGO) are getting it, then we're on the right track,” he said.

On the company’s new mobile strategy, Racinskas said past LEGO mobile titles were typically built to support product marketing, while the new focus will on standalone experiences that can be played for years.

To that end, the company has partnered with developers such as Nimblebit and Gameloft to develop new games, instead of the work-for-hire outfits it previously looked to.

“We want to find a bigger footprint in the company and that's why we are partnering up with best-in-class partners,” said Racinskas.

While the newly built diorama has broken the world record, its life is just a temporary one. Racinskas said though the company is figuring out how it can take parts of the model and display them elsewhere at the LEGO House.

Full disclosure: LEGO paid for our travel and accommodation to Denmark. Our coverage remains neutral.