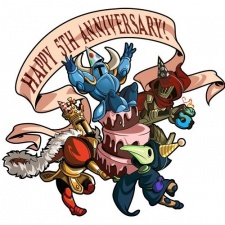 California-based developer Yacht Club Games revealed the sales figure as part of its celebration of the game's fifth anniversary.

Since June 2014, Shovel Knight has launched across 12 platforms including Nintendo Switch and PlayStation Vita.

On top of this, the studio celebrated by holding a live stream that showcased the development journey such as original artwork and pitch meetings with Nintendo. You can find all of the details here.

Shovel Knight was originally announced as a Kickstarter campaign with a minimum goal of $75,000 to fund development. The campaign heavily surpassed its target, going on to collect a total of $311,592 and fulfilling all of its stretch goals.

The Blue Burrower went on to become a cult figure in the indie community and is often cited as an unofficial representative for the sector.

Shovel Knight has made 25 cameos in different video games including most notably Super Smash Bros. Ultimate as an Assist Trophy.