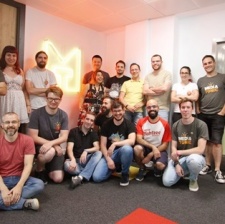 UK developer Mediatonic has opened a new office in Madrid as the company continues to expand with a fresh recruitment drive.

The Madrid studio was originally opened in 2017 with a team of five in a co-working space. The office currently employs 20 staff but plans to grow to 70 by 2021.

It all follows a funding round earlier this year that saw Synova Capital Fund III take a stake in the company of between 25 and 50 per cent. The investment has helped the firm develop original IP and continue its work with partners such as Microsoft, Square Enix and Warner Bros.

Mediatonic is currently working on titles such as Gears Pop and Fall Guys: Ultimate Knockout.

“It was an amazing moment to celebrate the new studio in Madrid,” said Mediatonic co-founder Dave Bailey.

“The local games community is incredibly engaged, with people traveling from right across Spain to take part and show their support. It was great to hear developers talking about important issues in the industry and share what they've learned and I hope this new space can contribute and encourage these kind of positive conversations.

“Most of all, we got to play games together and enjoy the moment as we look to an exciting future growing in Spain.”