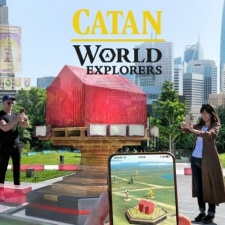 The Pokemon GO and Harry Potter: Wizards Unite studio was previously found to be working on a new multiplayer location-based title based on the popular board game of Catan late last year, which has now seen a partnership with French board game publisher Asmodee come to fruition.

Catan: World Explorers is one of 10 projects Niantic currently has in development and sees players experiencing the board game of Catan with a "modern twist".

The game's description points to users harvesting supplies, such as Lumber, Wool, Grain, Brick, and Ore, as well as constructing buildings on settlements and playing dice mini-games to earn bonuses.

At the time of writing, Catan: World Explorers has soft-launched in New Zealand on Android devices with various gameplay clips materialising online.

When reached out for comment, a Niantic representative told PocketGamer.biz that: "It's powered by the Niantic Real World Platform in partnership with the Catan team and Asmodee, and will be looking to transform the classic board game into a mobile AR experience."

"It'll also enter beta very soon, and you can visit catanworldexplorers.com to stay up to date."

However, the representative could not comment any further on the soft launch or release date. Players can pre-register for Catan: World Explorers ahead of its official launch.

Head on over to our soft launch list to keep up-to-date with all of the latest soft launch titles, including Crash Bandicoot Mobile, Angry Birds Legends, Tom Clancy's Elite Squad and more.

Additionally, we recently spoke about how Pokemon GO is still flying high after the worldwide catch 'em all celebrated its fourth anniversary.