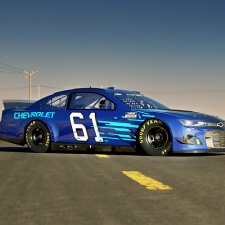 Zynga has partnered with NASCAR to bring its "iconic" Chevrolet Camaro ZL1 1LE race car to the world of CSR Racing 2.

The new vehicle can be unlocked via CSR Racing 2's America Road Trip series, in which players compete in a coast-to-coast US tour of American car culture. Users must place first to unlock the car for their garage.

The American Road Trip series takes racers through cities like Philadelphia, Detroit, Los Angeles and more. Alongside this, event will also unveil the new Route 66 race track, allowing players to race on the American highway.

Outside of NASCAR racing history, the Chevrolet Camaro is best known as the vehicle Bumblebee transforms back and forth from in the Transformers films.

"It's hard to imagine a more iconic racing brand than NASCAR and we are thrilled to work with them in such a celebration of American car culture," said CSR2 vice president Julian Widdows.

"The Camaro ZL1 1LE is one of the fastest, track-capable production vehicles racing in the NASCAR Cup Series right now. We hope our players will be delighted to add the vehicle in their racing lineup."

CSR Racing 2 is available to download across iOS and Android devices.

Most recently, Zynga launched a new casual card-based game from its Turkey studio called Bluff Plus.

Prior to this, the publishing giant announced its acquisition of hypercasual startup Rollic.