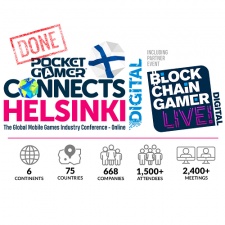 Helsinki may have been the headline - and the fabulous Finns were definitely out in force - but last week's Pocket Gamer Connects Digital was also Steel Media’s most international event ever, with attendees from a staggering 75 countries. We welcomed 10 new countries for the first time, including Bangladesh, Ivory Coast and the Seychelles.

We also saw attendees from every continent other than Antarctica, but we know that penguins find it hard to p-p-p-p-pickup a smartphone, so we'll let them off this time.

Numbers were up across the board, with 1,500+ attendees from at least 668 companies taking part, meaning that our 24/7 meeting platform was absolutely buzzing with business networking all week long. More than 2,400 ‘formal’ meetings were held on this platform alone, with countless more contacts being made on the dedicated Discord servers.

Most of the audience were game makers, with 65% of attendees being developers or publishers - and we're proud to say that more than half of those were the indie devs that are the heart and soul of every Connects event. We also welcomed large numbers of platform holders and service companies, as well as investors, industry organisations and the media.

And always with one eye on the future, we hosted students from 46 academic institutions looking to be the next generation of games professionals.

The 21 conference tracks spanned everything from live ops and case studies to future trends, transmedia and blockchain gaming. 293 world-class speakers treated the audience to 170+ hours of cutting edge content from all around the world.

And an intensively creative Pocket Jam #5 saw 14 individuals compete to make the best game on the theme of 'masks' in just 30 hours. The participants teamed up and final honours went to a game called Social Distance Hero, a timely project on the theme of avoiding interaction on a Helsinki tram.

The other games to come out of the session - Codename Darling and Super Delivery - were incredibly slick given the small amount of time involved. Two of the jammers used their marketing know-how to rustle up sample game ads too.

Quote us on that

An understandably enthused Chris James - CEO at event organisers Steel Media - said, "Whilst we would obviously rather have been in Helsinki in person, meeting all the awesome local developers and international guests face-to-face, we have to play the cards we’re dealt and we’re delighted by the support and feedback to our latest digital event outing with our broadest audience reach ever.

"I’d like to say a personal huge thanks to all of our amazing sponsors, each of the c.300 speakers who shared their time and insight and the well over 1,500 professionals who viewed the talks, held meets, took part in multiple fringe events and generally ensured we created as much of the general PGC magic as is possible in the digital space.

"Fate allowing, we will be back in Helsinki next year (and London too) to thank you all in person and raise a glass to this incredible industry! Suffice to say, PGCD will return - see you in November to end the year in style!”

After all that, you'd think we might take it easy for a bit. But we're doing it all again this November 9th to 13th!

That's right - plans are well underway for one more Pocket Gamer Connects Digital event to see the year out.

We'll bring you more details about the conference soon, but we can tell you that we already have some amazing speakers confirmed, including:

Putting the 'Super' into 'Super Early Bird', you have just days to scoop up your tickets at the lowest price they will ever be. You could save up to $380 if you order by midnight this Thursday September 24th. Book now!

Speak at the seventh Pocket Gamer Connects Helsinki this September