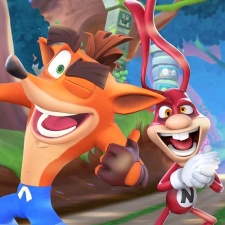 King has partnered with Dominos to bring the pizza restaurant chain's villain, The Noid, to Crash Bandicoot: On the Run.

The unusual collaboration will see The Noid appear in the endless runner as a mini-boss from May 7th, 2021, pitting Crash against the slippery character through the story.

Players will also have the opportunity to unlock exclusive Domino's Pizza-themed player skins.

Originally appearing in adverts during the 1980s, The Noid's main goal in life is to stop pizza deliveries before they arrive at their destination. Now the mascot has returned as part of a new campaign, appearing across television ads and in the King developed title.

Crash Bandicoot: On the Run generated $700,000 in its first week and this new collaboration will no doubt be looking to utilise the marsupial's dedicated audience.

"We're excited to launch our first in-game collaboration for Crash Bandicoot: On the Run with Domino's," said King head of marketing Richard Hocking.

With the Noid making its big return this year and the Crash Bandicoot franchise celebrating its 25th anniversary, it was the perfect opportunity to have players take on the Domino's antihero alongside other nostalgic Crash bosses in this brand-new mobile adventure."

No mention of whether The Noid is a temporary addition or a permanent member was announced, though the game does update with new themes every month.

Since releasing on March 25th, Crash Bandicoot: On the Run has stormed to 33 million installs worldwide.

Prior to launch, we spoke to King creative lead Stephen Jarrett about the company's pursuit to create "the Crashiest Crash game ever".