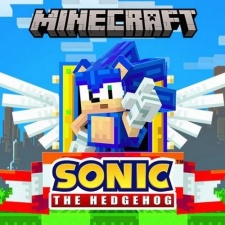 Mojang Studios and Sega have partnered together to add Sonic the Hedgehog to Minecraft as part of the character's 30th anniversary celebrations.

After being teased during Sonic Central last month, the collaboration was finally confirmed that will see Sonic, Tails, Knuckles, Amy, Shadow and Doctor Eggman be transported into the world of Minecraft. Numerous levels will also be available to access (according to the trailer), such as Green Hill Zone and Chemical Plant.

There will additionally be a two-week Sonic-themed event that will feature mini-games and a few surprises all connected to the Blur Blur.

"Yes, there are rings to collect. They are the blockiest rings you have ever laid your eyes on and I love them," Mojang Studios creative writer Sofia Dankis wrote via a blog post.

"I’m not saying there was anything wrong with the original rings, but these right angles just feel right. The rings aren’t the only thing that Sonic brought with him, there are also plenty of obstacles to dash past, bosses to defeat, and momentum to build as you run towards a high score."

Players can also get their hands on a Character Creator item that is available to download free in the Minecraft Marketplace.

The full trailer can be watched below:

Sega recently unveiled a Sonic 30th anniversary event with its own celebratory video looking back at the history of their mascot.

This culminated with the previously mentioned Sonic Central, an online presentation that went on to reveal several new games, partnerships and events set to take place over the next year or so.