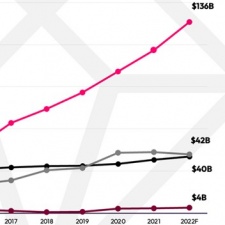 data.ai and IDC's Gaming Spotlight 2022 report has revealed that mobile gaming is ontrack to represent 61 per cent of the entire gaming market’s consumer spending.

With predictions of the games market reaching $222 billion in consumer spending this year, data.ai projects that $136 billion will come from mobile – in no small part due to mobile’s truly international audience and appeal, with a market share 3.2 times as large as console gaming.

The magnitude of mobile

During the first quarter of 2021, users globally downloaded 45 per cent more mobile games every week when compared to levels prior to the pandemic, data.ai reports. This meant a total surpassing 1.1 billion game downloads weekly.

One year on, consumers globally spent more than $1.6 billion per week in Q1 2022 exclusively on iOS and Google Play mobile games – a rise of 30 per cent from pre-pandemic levels. Growth was led by China during this period, while North America and western Europe combined comprised half of mobile game spending.

However, in both spending and downloads for the quarter, eastern Europe has declined, with Russia’s share of consumer spending dropping from 50 per cent to 10 per cent in April. A number of developers pulled their games from the Russian market following the country's invasion of Ukraine, including some of the largest mobile studios Rovio, Supercell, and Zynga, and other high-profile firms including World of Tanks developer Wargaming.

Core games continue their dominance over consumer spending, but data.ai’s report found that genre preferences are more varied on mobile than on other platforms, with eight different genres within the top 10 games.

There was a surge in simulation and hypercasual popularity during 2021 also, with the latest most monetisable genre being 4X march-battle strategy games.

Demographic inclusion is apparent too, with 47 per cent of the US’ top 1,000 grossing mobile games skewing in favour of Gen Z. However, Gen X is the US’ fastest-growing age bracket for mobile spending; the share of games skewing towards older audiences increased by seven per cent from 2019 to 2021.

At a ratio of 3:1, most mobile players stated, according to IDC, that they prefer in-game ads in exchange for free content than having to pay and thereby avoid ads.

"Mobile is democratising the space and is now the primary driver of growth for digital games consumption," said data.ai head of marketing insights Lexi Sydow. "We are seeing greater diversity across gaming genres allowing publishers to serve new gamers across generations and genders."

Sensor Tower recently reported that, for the first time in history, year-over-year revenue from mobile games saw a decrease in the first quarter of 2022.