Ranking fifth of all publishers worldwide for the quarter 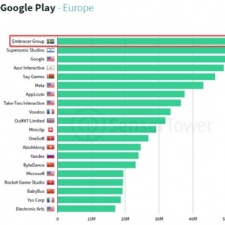 Perhaps most famous for its myriad acquisitions and hit hypercasual games, Sweden-based Embracer Group ranked as the very top publisher for downloads on Google Play in Europe for Q2 this year.

According to data by Sensor Tower, Embracer Group’s mobile publishers combined came in first on Google Play in Europe in addition to fifth place worldwide for the time period.

When looking at the Google Play results specifically, Embracer Group edged marginally ahead of Supersonic Studios – whose parent company ironSource promoted Danielle Cohen Reich to VP of gaming last week. Embracer and Supersonic were the only publishers to surpass 55 million downloads on the Play Store this quarter, even ahead of Google, who took third place.

Azur Games, AppLovin and Voodoo all ranked within the top 10, as did Take-Two Interactive, which completed its acquisition of Zynga this quarter for what was, at the time of its announcement, the largest sum in games industry acquisition history.

Even looking solely at acquisitions made within the last year, Embracer Group’s ever-growing catalogue of companies now includes, among others:

Lindell commented: "I’m proud to put some spotlight on Embracer’s mobile publishers, CrazyLabs, Easybrain, DECA etc, who collectively ranks as the number five publisher worldwide and the number one publisher on Google Play in Europe during Q2 2022."