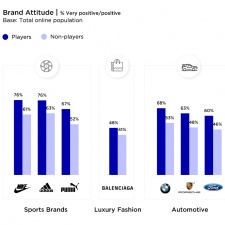 New data from Newzoo suggest that gamers across platforms show more positive attitudes towards brands than non-gamers – potentially an opportunity for brands to engage with gamers, although the report does stress that strategies must reflect the nuances of gamers’ behaviour, preferences, and demographics to be effective.

Of the 13 brands surveyed – ranging from sports brands, luxury fashion, the automotive industry, and beverages – every brand was viewed more positively by gamers than non-gamers.

While in some cases the discrepancy was small – for example, 32 per cent of gamers surveyed had a positive view of Budweiser, compared to 31 per cent of non-gamers – in others, the difference was considerable.

Both energy drink brands surveyed – Red Bull and Monster – were viewed positively by over 20 per cent more gamers compared with non-gamers, suggesting a better return of investment for in-game branding opportunities for these companies.

In a case study comparing Apex Legends and Fortnite, the report examines the differing demographics and impact on brand positivity.

Although 54 per cent of players for each game consumed soft drinks while playing, alcohol consumption was 34 per cent among Apex Legends players – five per cent more than among Fortnite players, at 29 per cent. This suggests that branding opportunities for alcoholic drinks could lead to a higher return of investment in Apex Legends than Fortnite.

The study also breaks down the groups based on which subsection of gamer they fall into, such as ultimate gamers, community gamers, or mainstream gamers. By honing in on these demographics, brands can produce more relevant messaging to the audience and attract new consumers through the use of in-game advertising and cross-promotion.

While cross-media partnerships are an enduring reality in the mobile games sector, there is undoubtedly a greater degree of awareness from non-gaming entities to engage, including the TV show Queer Eye's first in-game promotion, Spotify's permanent presence in Roblox, and even Space Ape Games' pre-release exclusive of the Black Eyed Peas, Shakira, and David Guetta's new single prior to its release.

95 per cent of gamers in Africa choose mobile, says Newzoo