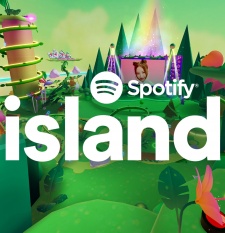 Spotify has unveiled a partnership with Roblox with the launch of Spotify Island, marking the first music streaming brand’s appearance on Roblox and Spotify’s first steps into the amorphous metaverse with Spotify Island.

The music streaming service is aiming to create “an easy opportunity for artists to connect with fans and to partner with Spotify on the creation of in-game virtual merchandise” – of which Spotify’s share “will go directly back to the artists themselves”.

Spotify’s move into Roblox is of little surprise. Roblox itself has been incredibly successful in utilising music industry talent – including hosting live sets from David Guetta and 24kGoldn and the Brit Awards virtual party in February and March 2022 alone – as well as wider brands such as McLaren.

Spotify’s audience base has steadily increased throughout 2021, with Q1 2022 premium subscribers rising by two million to 182 million, and MAU up from 406 million at the close of 2021 to 422 million.